Three Up
1. Olathe North
Olathe North took the stage against Free State and thoroughly proved why they are the most talented team in the Sunflower League. By winning the game they guaranteed themselves a share of the Sunflower League crown, but more importantly put a giant exclamation point on the the amount of talent they possess.
2. Olathe East
The Hawks were able to hone their skills quite a bit against Leavenworth, and appear to be peaking at a perfect point in the season. Jeff Meyers best coaching job yet? It's looking that way.
3. SM South
The Raiders (below) had a chance to step up and prove their worth, and they did just that in beating SM North by three points in overtime. The two squads were nearly identical, but in the end the Raiders had just a little extra juice to get it done. 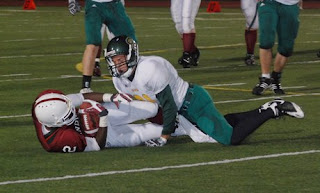 Three Down
1. SM East
The Lancers really had a chance to make a statement against Olathe South. And for a good chunk of the game it looked like that statement was going to be made. Late defensive lapses however derailed the upset.
2. Lawrence
Sitting at 0-6 entering district play is bad, but for a program as prestigious as Lawrence High the winless record is downright depressing. The lifeless effort the Chesty Lions displayed against SM West didn't help out by any means.
3. Lawrence Free State
If the Firebirds were primed for a big game upset, it was on Friday night. A home game against Olathe North drew a massive crowd and hoards of media coverage. Unfortunately for the Firebird faithful Free State was never able to gain the upper hand, and suffered a disappointing loss.
Individual Highlights
**SM West's Adam LeBlanc scored three touchdowns on Friday, two coming on the ground and one through the air. He also made a key interception for the Vikings.
**Olathe East's Austin Fulson had one of the more impressive stat lines of the season. He collected 154 rushing yards and two touchdowns on three carries. No, that's not a typo. The highlight was a 96 yard touchdown scamper.
**Olathe North's James Franklin (below middle) rushed for 284 yards and four touchdowns on 31 carries. His numbers this season have been, quite frankly, disgusting.
**Olathe East's Carter McEntee had another nice game, completing 15 of 20 passes for 190 yards and three touchdowns. 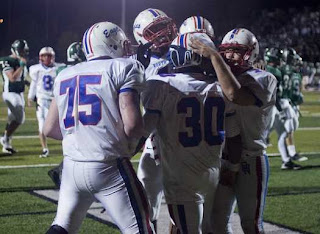 Week Seven Power Rankings
1. Olathe North (6-0): The Eagles boast as much speed as any Sunflower League team in years.
2. Lawrence Free State (4-2): Hard to bump the Firebirds down when they lost to #1 but previously beat #3.
3. SM West (5-1): Vikings have quietly put together a very impressive record; Callaghan and Co. have not yet peaked.
4. Olathe East (4-2): Hawks face big week seven challenge in the one-loss Blue Valley Northwest Huskies.
5. Olathe South (4-2): The cardiac kids of the Sunflower League pull another one out of the hat.
6. SM Northwest (4-2): The Cougars will have a chance to prove their worth against SM West this Friday.
7. SM South (3-3): Sitting at .500 before districts is a big accomplishment for the Raiders who haven't enjoyed alot of success in recent years.
8. Olathe Northwest (2-4): Districts will prove whether 2009 was just a pipe dream for the Ravens.
9. SM North (2-4): The Indians four straight losses are deceptive, but unfortunately their schedule doesn't get any easier.
10. SM East (2-4): The Lancers were minutes away from a .500 record.
11. Lawrence (0-6): Fortunately for the Chesty Lions, misery has company.
12. Leavenworth (0-6): See Lawrence.
Posted by Eli Underwood at 12:30 AM