Three Up
1. Lawrence Free State
The Firebirds roasted SM Northwest 42-0 on Friday and their running back Kirk Resseguie is making people forget about Chucky Hunter. Camren Torneden has hit his mid-season stride and is playing at a Simone level once again. All in all, it looks like Free State is about as prepared as they can be for their showdown with Olathe North Friday.
2. SM West
The hangover from the Vikings loss last week carried throughout the first half, as they were tied at six all with SM South. In the second half the Vikings finally put it all together and outscored SM South 31-8. Also, it looks like the running back combination of Cordi Pascal and Will Livingston is getting stronger ever week.
3. Olathe North
The Eagles are in control of their own destiny when it comes to winning the Sunflower League crown. Their showdown at Lawrence Free State this Friday may be the game of the year in the conference, and with a victory it looks like Olathe North will have a fairly simple route to an undefeated regular season.
Three Down
1. SM Northwest
Just when it looked like the Cougars were hitting on all cylinders they go and lose by 42 points to Lawrence Free State. SM Northwest's efforts against their two toughest opponents have been unimpressive to say the least (they lost to Olathe North 41-12 in week two).
2. Olathe Northwest
For another season, Olathe Northwest (below) will be the lowest on the Olathe school totem pole. Although their defensive effort against Olathe East was impressive on Friday their offense left quite a bit to be desired. The Ravens 0-3 mark against fellow Olathe schools is a sour note on what was looking to be a decent season. 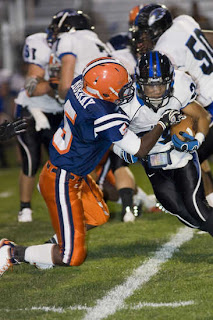 Early on it looked like SM North might be primed for their best season in years. But the last three weeks have exposed the Indians. The Indians two wins have come against teams that are a combined 0-10, and the 42 point loss to Olathe North on Friday was not a great sign.

**Lawrence Free State's Camren Torneden rushed for 152 yards and a touchdown, in addition to a 52 yard punt return for a touchdown.

**In addition to Torneden's totals, Free State running back Kirk Resseguie totalled 201 rushing yards and three rushing touchdowns. In his last three games he has rushed for 503 yards and nine touchdowns.

**Olathe North's James Franklin ran the ball 23 times for 200 yards and three touchdowns in a mere three quarters of work.

**SM West's DJ Balazs completed 12 of 20 passes for 151 yards and one touchdown, and collected his 17th career victory as a starter--tops among active quarterbacks in the Sunflower League. 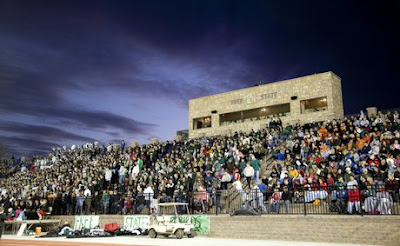 Lawrence Free State's new stadium (above) will be the site of the big clash this Friday.

1. Olathe North (5-0): The Eagles face their biggest test of the regular season this Friday.

4. Olathe East (3-2): The Hawks may be primed to run the table on the rest of the regular season.

6. SM Northwest (3-2): Cougars latest performance leaves much to be desired; especially with SM West coming up in two weeks.

7. Olathe Northwest (2-3): The Ravens once again sit as the low-team on the Olathe school totem pole but amendments can always be made come playoff time.

8. SM North (2-3): The Indians have a good chance of getting back on track with school district rivals SM East and SM South coming up the next two weeks.

9. SM South (2-3): The Raiders fell apart after a solid first half against SM West.

10. SM East (2-3): The Lancers two victories have come against winless Lawrence and Leavenworth, but perhaps the momentum will carry.

11. Lawrence (0-5): Lawrence came close to beating Olathe South Friday but they still weren't able to get it all together.

12. Leavenworth (0-5): The Pioneers held SM East scoreless in the first quarter of their game Friday before the Lancers took off.

Player of note that should be on your list this week - SMW's Nick Sylvester. Nick had field goals of 39,44 and 27 yards in SMW's win and his foot kept them in the game in the first half.

SMN-SMS: Battle of the almost there teams. Hard to pick a winner here, SMS defense has been pretty good, SMN offense also. Both have had a lot of trouble in the second half. The better conditioned team wins...SMN 31 SMS 24

OS-SME Can SME continue their winning streak? Not against a surging O South team...OS 35 SME 7.

ONW-SMNW If there was a game this year where one of the bottom 6 could beat one of the top six you'd think this would be it. Still ONW's lack of offensive production keeps the balance of power in tact here I think...SMNW 21 ONW 7

LV-OE No contest again but LV can look forward to some chances to at least score in district play starting next week...OE 45 LV 0

LHS-SMW Lions suprised with 23 points against OS last week but will be no match for the mighty Vikings. West needs to show they can SCORE this week though...SMW 38 LHS 6

ON-LFS Clearly the game of the year. If anyone can match Franklin and co. it's the Firebirds. This one comes down to the wire. LFS 27 ON 26.