Top Five Player Ratings
Player Ratings are subject to change on a week-to-week basis
1. James Franklin, running back, Olathe North: Franklin continued his stellar season with a 23 carry, 200 yard rushing performance Friday. He also addded three rushing touchdowns, boosting his season total to 14.
2. Camren Torneden, quarterback, Lawrence Free State: Torneden once again showed his versatility, rushing for 142 yards and a touchdown, in addition to returning a punt 52 yards for a touchdown.
3. DJ Balazs, quarterback, SM West: Balazs came back from a disapointing game against Free State with one of his best performances of the season. The senior signal caller completed 12 of 20 passes for 151 yards and one touchdown in leading SM West to a 23 point victory.
4. Brandon Willingham, running back/defensive back, Olathe East: Willingham (below) gets a bump up to the #4 spot after rushing for 168 yards on 19 carries in Olathe East's victory. Willingham's emergence from the woodwork this season has been quite impressive, and he has seemingly become one of the most complete players in the Sunflower League. 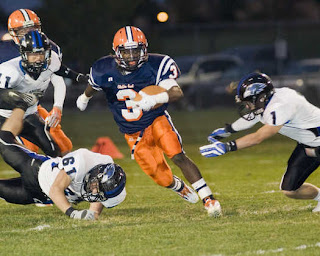 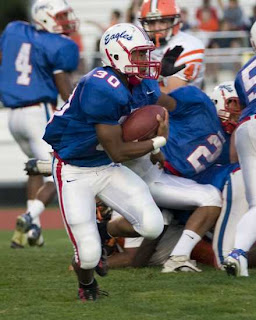