Olathe North 48, Olathe South 7
No, Olathe South didn't exactly "lay down and die" in their final game of the season. Rather, Olathe North took their own game to another level in their final tune-up before the start of the playoffs. Simone Award favorite James Franklin ran the ball 20 times for 168 yards and two touchdowns in the all out domination. The 168 yards pushed Franklin's career total for rushing yards to 5,038--the 5,000 yard plateau has only been accomplished by one other Olathe North play, Darren Sproles. Franklin will need 192 yards to break Sproles all-time rushing mark of 5,230 yards.
Olathe East 20, SM South 13
It wasn't necessarily the flashiest way to qualify for the playoffs, but the Hawks from Olathe East got the job done. SM South's Johannes Swanepoel put the Raiders up 3-0 in the first quarter with a 31 yard field goal, but Olathe East would respond. Touchdowns by Carter McEntee and Hayden Groves (below) helped Olathe East gain a 14-6 halftime advantage. They held the lead throughout the rest of the game. 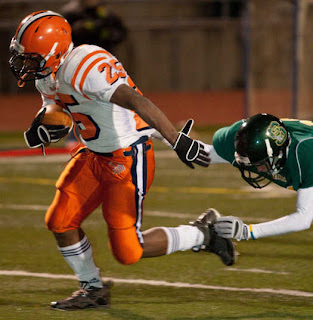 Lawrence Free State 35, Olathe Northwest 14
Down 21-0, with little time remaining the first half Olathe Northwest's Cullen Phillips returned a kickoff 92 yards for a touchdown to move the Ravens within 14. On the ensuing kickoff Free State's Keene Niemack returned a kick of his own 82 yards to the house to push the lead back to 21. It was that kind of a night as the two teams battled for the district crown. Ultimately, Olathe Northwest never appeared to have an answer for Free State who was led by Kirk Resseguie's 182 rushing yards and touchdown.
Lawrence 13, Leavenworth 6 (OT)
For awhile it looked like neither team was going to collect a win for the season. A 26 yard touchdown pass from Chris Gaston to Taylor Coleman tied the game at 6 all in the fourth quarter, before Lawrence botched the extra point attempt. With the teams deadlocked at the end of the fourth quarter the game went into overtime. Lawrence's Tyrae Jenkins--one of the lone bright spots the team has had all season--punched in a touchdown to give Lawrence a touchdown advantage. Leavenworth failed to score giving LHS it's first victory of 2009.
SM Northwest 28, SM North 12
Neither team could qualify for the playoffs, but that didn't stop the game from being an all out battle. SM Northwest's John Hauk was the top dog for the Cougars rushing the ball 36 times for 221 yards and two touchdowns. For SM North, quarterback Ryan Goodburn completed 20 of 37 passes for 258 yards and a touchdown. In the end the battering attack of Hauk and the Cougars was enough to claim the Hula Bowl title for 2009.
SM West 28, SM East 12 (Thursday Night Game) (All Star Video Sports Highlights)
SM East had several big surges throughout the game, but ultimately the Vikings were able to hold their composure and collect the W. SM West's Will Livingston had touchdown runs of 6, 47, and 90 yards, the last of which crushed any hopes the Lancers had at mounting a fourth quarter comeback. SM West, now 8-1, was eight points from an undefeated regular season, while SM East made a huge turnaround after starting 0-3. Both teams will be making appearances in the 6A state playoffs starting next week.
Playoff Notes
Regional playoff matchups for Class 6A are as follows:
East
Olathe North (9-0) vs. SM East (4-5)
Lawrence Free State (7-2) vs. Olathe East (6-3)
Blue Valley Northwest (8-1) vs. Olathe Northwest (4-5)
SM West (8-1) vs. Blue Valley (3-6)
West
Manhattan (9-0) vs. Maize (3-6)
Wichita Heights (5-4) vs. Wichita South (5-4)
Wichita Northwest (7-2) vs. Derby (6-3)
Dodge City (7-2) vs. Topeka (6-3)
Posted by Eli Underwood at 11:36 AM

SME @ ON Just a shame the Lancers have to face the Eagles...they might give a game to any other team. The East D might be able to slow the North O slightly but East has very little offensive punch and will not be able to stay in this game...ON 33 SME 7

OE @ LFS A great rematch of a week 1 game won by the Hawks 29-20 on four Firebird turnovers. I don't expect a repeat performance by a Free State team that seems to get better as the season goes along...LFS 27 OE 21

BV @ SMW What a tough draw for the Vikings. I don't think anyone would really put ONW aheaed of these Tigers but they wind up seeded higher. It would have been a lot better for the Vikes to be the 3 seed and get ONW first round and host second round but you have to play the cards you're dealt. The matchup of BV's high flying offense and West's stone wall defense will be a great one but the real key to this game will be whether DJ, Will, Cordi, Adam and co. can take advantage of a very suspect Tiger D. I think they get enough done in the end...SMW 33 BV 27

ONW @ BVNW The Ravens get into the playoffs out of the worst district in 6A by far and it will show this game. ONW has not been able to muster ANY offensive production against good teams and the Huskies are definitely a good team...BVNW 34 ONW 7