Olathe North
The Eagles possess as much speed and athleticism as any team in the state. James Franklin has rushed for 1,936 yards and 25 touchdowns, while option quarterback Victor Simmons has added 631 rushing yards of his own. Wide receiver Jason Peete has been one of the league's biggest deep threats all season. On the other side of the ball Tre Walker, Lucas Vincent, and Adonis Saunders anchor a swarming defense.

SM East
Robby Moriarty's 729 passing yards aren't exactly wowing, but his poise in recent weeks has helped place SM East in the playoffs. Receiver Kevin Hertel is the Lancers biggest threat offensively, and he has been making big plays all season long.

What to Expect
SM East has been playing solid football of late, but its hard to say whether or not that will equate to much against a powerhouse like Olathe North. The Eagles are stacked and look primed for a playoff run. Right now it looks like the road to a 6A state championship will go through Olathe North. If the Eagles establish their Wildcat formation early, they shouldn't have much trouble taking care of business. 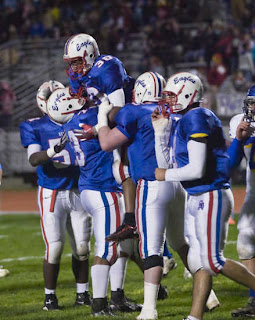 Olathe East
The running back duo of Brandon Willingham and Hayden Groves (both of whom I rank in my top five player ratings) are as solid as any duo the league has had in years. Combined, the two backs have rushed for 1,973 yards thus far. At quarterback the Hawks are led by Carter McEntee, a player who has shown flashes of dominance all season.

Free State quarterback Camren Torneden is the most explosive player in the Sunflower League, bar none. To compliment Torneden, Free State employs Kirk Resseguie at the running back position. The first year starter has rushed for 1,038 yards on the season to add to the 778 rushing yards Torneden has put up.

What to Expect
Olathe East beat Free State in week one and its reasonable to believe the Firebirds are anxious for revenge. Free State has more playoff experience than any team in the 6A playoffs, and it should show come Friday night. This game is always full of fireworks and it should be a shootout. The offensive talent on display is as good as any Sunflower League matchup could produce.

Olathe Northwest
The Ravens have a pretty decent core of skill position players. Josh Lemke, a dual threat quarterback, acts as the focal point of the offense, having passed for 772 yards. Running backs Cullen Phillips (567 rushing yards) and Brandon Bouvilom (556 rushing yards) act as a strong one-two punch for the Ravens.

Blue Valley Northwest
Matt Ornduff, arguably the state's top receiver, has caught 53 passes for 911 yards and 12 touchdowns. Failure to properly address Ornduff's ability could spell doom for the Ravens. The quarterback getting Ornduff the ball is Koby Chadick who has passed for 1,726 yards this season.

What to Expect
Olathe Northwest probably hasn't as efficient of a passing offense as Blue Valley Northwest. The Huskies put up huge numbers and also have no trouble scoring (30+ points in seven of nine games). Olathe Northwest will have to control the tempo of the game to keep things close.

Blue Valley
The center of the Blue Valley offense is three year starter Anthony Abenoja, who has passed for 1,932 yards this season. His primary targets are PJ DeBey (58 catches, 731 yards) and Jacob McDermott (28 catches, 395 yards). After a 1-6 star to the season the Tigers have collected two impressive wins in a row and appear to be clicking.

SM West
The Vikings are also led by a three year starter at quarterback, DJ Balazs. The senior has thrown for 1,067 yards (14 yards per completion) in SM West's run based offense. Running backs Will Livingston (666 rushing yards) and Cordi Pascal (617 rushing yards) will be splitting time in the backfield for the Vikes. All purpose player Adam LeBlanc has 302 yards receiving, and leads the Vikings defense with two interceptions.

What to Expect
Is this de-ja-vu all over again? Last season SM West rolled to a 9-0 record before losing to a red-hot 2-7 Blue Valley Northwest squad in the first round of the playoffs. Blue Valley, despite their 3-6 record, has been playing as good of football as anyone lately and nearly knocked off Olathe North in week seven. You can guess SM West won't be overlooking Blue Valley, and visa-versa.