1. James Franklin, running back, Olathe North: Franklin finished off his last ever regular season game at Olathe North by rushing for 168 yards and two touchdowns on 20 carries. He now needs a mere 192 rushing yards to break the school record for career rushing yards set by Darren Sproles.

2. DJ Balazs, quarterback, SM West: In collecting his 21st victory as a starting quarterback, Balazs pushed his season passing total to 1,067 yards. It marks the second year in a row Balazs has passes for over 1,000 yards.

3. Camren Torneden, quarterback, Lawrence Free State: Torneden (below) had a seven yard rushing score, and a nine yard touchdown pass, and record an intereption on defense in his team's 35-14 victory over Lawrence Free State. Torneden has totalled 778 rushing yards on 120 carries thus far. 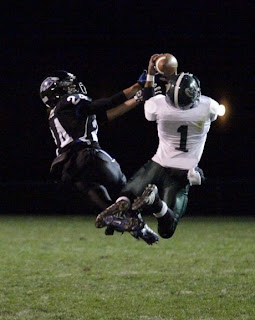 4. Hayden Groves, running back, Olathe East: Groves finished off the season rushing for 129 yards and two touchdowns on 27 carries. Groves fourth quarter touchdown--a 10 yard run--pushed Olathe East ahead by two scores, and ultimately sealed the deal on the victory. The rushing yardage bumped his season total to 1,064 yards on 174 carries.

5. Brandon Willingham, running back/linebacker, Olathe East: Willingham was forced to leave the Olathe East game in the third quarter, but he won't be bumped off the list for a one game injury. His 909 rushing yards on 128 carries are big numbers, but his 64 tackles on defense have made him even more valuable to the Hawks.

Posted by Eli Underwood at 3:53 PM