Olathe North (11-0) at Blue Valley (5-6)
Where: Blue Valley High School
Time: 7 pm, Friday
CJ Online Computer Spread: Olathe North by 13.8
Who to Watch For: It might be a good idea to keep an eye on #30 in white--Olathe North's running back otherwise known as James Franklin (below in the 2008 matchup). Olathe North's all-time leading rusher has rushed for 508 yards and six touchdowns in his two previous games against the Blue Valley. Franklin's 2,321 rushing yards are also tops among any Kansas player still active in the playoffs. For Blue Valley their success will be riding on the arm of senior Anthony Abenoja. In last year's Sub-State matchup against Lawrence Free State, Abenoja went cold completing only seven of 21 passes for 78 yards and two interceptions. It will take a big game from Abenoja for the Tigers to pull the upset--but based on his play in recent weeks one can imagine he will play better in this year's Sub-State game than last. 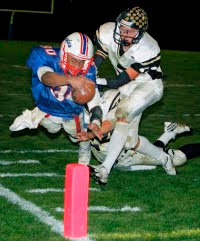 What to Watch For: Olathe North has had one relatively close game all season--their week seven 49-35 win against Blue Valley. The Tigers came out with a high flying offensive attack that Olathe North wasn't prepared for, and it took a good two and half quarters before Olathe North was able to establish a solid lead. In 2008, these two played one of the most thrilling games in the metro with Blue Valley claiming a 42-41 victory. If the past two games are anything like this one you can expect offensive fireworks in mass quantities. Olathe North likely possesses the most team speed of any team left in 6A, while Blue Valley has the most playoff experience and was one score from reaching the 6A title game last year.
6A West Game
Derby (8-3) at Wichita Heights (7-4)
Posted by Eli Underwood at 9:50 PM