Olathe North 41, Lawrence Free State 28
Last season Olathe North met Lawrence Free State in the Sectional Round of the playoffs only to go on to play one of their most lackluster games of the season, resulting in a 10-6 loss. The Eagles were apparently dead set on returning the favor this season. Olathe North quarterback Victor Simmons (below) scored the first of his two touchdowns in the opening quarter to put the Eagles up 7-0. Free State's Camren Torneden connected with Keene Niemack on an 11 yard touchdown pass to tie things up, before Simmons added another touchdown run before the half to give Olathe North a 14-7 edge.
Free State's Matt Cole scored on a one yard touchdown run to even the score at 14 early in the third quarter, but the Firebirds were never able to gain the lead. Touchdown runs by James Franklin and Tre Walker gave the Eagles a 14 point lead, which provided ample cushion for the win.
The most telling stat of the game was Olathe North's run production. The Eagles ran the ball 63 times for 414 yards--and threw zero passes. James Franklin's accounted for 247 of those yards, and in doing so broke Darren Sproles career rushing record at Olathe North. Franklin now sits at 5,434 career rushing yards (Sproles' record was 5,230). 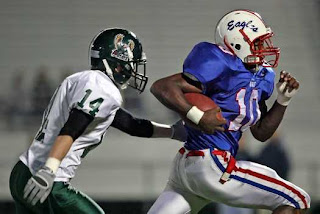 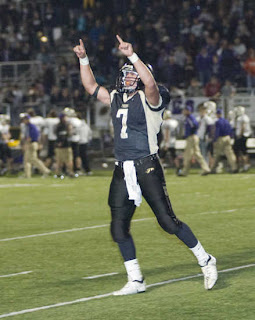 News and Notes
**The Simone Award candidates were announced this past weekend. The four players up for the illustrious Simone Award are Olathe North's James Franklin, Blue Valley Northwest's Koby Chadick, Winnetonka's Darryl Jobe, and Blue Springs Darrian Miller.
**Olathe North's Lucas Vincent is among the four finalists for the Buch Buchanan Award, given annually to the most outstanding lineman/linebacker playing class 5A or 6A football in the KC Metro.
Posted by Eli Underwood at 10:52 AM