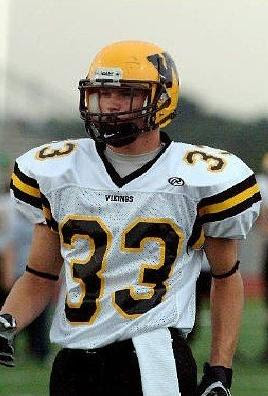 
As a junior, David Leonard returned punts and kicks for SM West, in addition to being a starting receiver and cornerback. Leonard caught 12 touchdown passes on offense, while also picking off several passes from his defensive back position and returning several kicks for touchdowns. Leonard was developing a name as one of the biggest scoring threats in the Sunflower Conference, but he was overshadowed that season by the fact that he didn’t play for one of the pass happy teams in the conference. Despite this, Leonard’s contributions helped SM West to a 9-2 record, with the Vikings losing in the Sectional Round of the playoffs to Olathe East.

Leonard and SM West came back in 2006 with high expectations after having been named the pre-season pick for the top team in the conference. Leonard and company did not fail to live up to those expectations. SM West went 12-0 and advanced to face Hutchinson in the 6A State Championship game.

In the title game Leonard had a stellar performance, intercepting a pass, recording several tackles, catching six passes for 49 yards, and returning a kick to the Hutchinson 13 yard line in the fourth quarter, which led to the eventual tie of the score. SM West came up short, 21-14, but Leonard’s performance left a mark. Shortly after the game he was offered scholarships to play at Air Force and Wyoming. Leonard ultimately chose to play at Wyoming.

When the final stats were totaled on his senior year, Leonard’s statistics were eye popping. Defensively he came away with 35 tackles, five pass break ups, and six interceptions of which he compiled 144 return yards and one touchdown. Offensively Leonard had 563 yards receiving and 13 touchdown catches. In the special teams game he returned 24 punts for 300 yards and two touchdowns. Kick return wise Leonard averaged 26.3 yards per return and totaled 289 yards. For his efforts Leonard was named First-Team All-Class 6A, in addition to being named the KC Metro Sports Multi-Purpose player of the year. At Wyoming Leonard has been a starter at receiver since his freshman season, and recently made the game winning touchdown catch for the Cowboys in the New Mexico Bowl.
Posted by Eli Underwood at 10:26 PM

Possiblly the best player to ever come out of this league! and the legend is still growing. 77 catches, 4 tds, and bowl game MVP! victory david, victory Sunflower league, and victory Eli for the easy pick.

Give me Rampy at Qb and Jason Thorne as the next linebacker!

scratch the Rampy= EKL my bad

leonard was also offered by K-state after commiting to wyo.

Good call Price, could have kept a great player in kansas.

Big 12 missed big on this one.