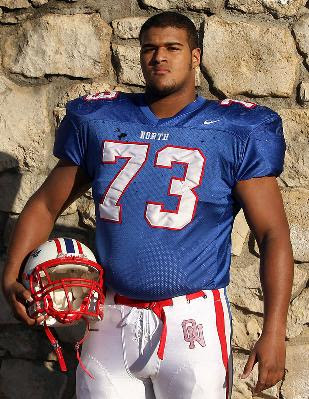 The NFL Draft this past weekend made headway with the amount of highly valued defensive tackles that were taken early in the First Round. What could be more fitting than naming a defensive tackle as the next player on the All-Decade list? Carrying this week’s honor is Olathe North’s Lucas Vincent.

Perhaps the thing that made Vincent such as dominant force on the interior of the Olathe North defense was his use of raw strength and agility learned on the wrestling mat. Away from football, Vincent placed second in the Class 6A 285+ pound weight division as a sophomore, and then won the state championship in the same weight division as a junior (he elected not to wrestle as a senior).

Despite his wrestling successes, football still remained Vincent’s biggest claim to fame. As a junior in 2008, Vincent developed a reputation for being an immovable force on Olathe North’s defensive line. Vincent tallied 49 tackles, 20 of which were solo, 11 quarterback hurries, and nine sacks on the season helping Olathe North to an 8-3 record, including a Regional playoff round upset of rival Olathe East.

During the off-season between Vincent’s junior and senior seasons his reputation as a defensive tackle prospect blew up. By April of 2009, Vincent had received offers from Nebraska, Kansas State, Missouri, Wisconsin, and San Diego State. He elected to finish the recruiting process early, committing to Missouri prior to the conclusion of his junior year.

The “Division One” tag tends to add a lot of attention and pressure, on and off the field for high school seniors. In the case of Vincent in only seemed to fuel his fire in 2010. Vincent started on Olathe North’s offensive and defensive lines, and helped lead one of the better Sunflower League teams of the decade.

Defensively Vincent recorded 40 tackles (17 for loss), six forced fumbles, and four sacks. Offensively he helped open holes for James Franklin’s 2,803 rushing yards, and 31 touchdowns. Most importantly he was a dominant force in Olathe North’s 13-0 record and 6A State Championship in 2009. Following the season Vincent earned All-State Class 6A honors, as well as being named Kansas Top 11 and First Team KC Metro Sports.
Posted by Eli Underwood at 12:45 PM

Vincent also was selected to play in the Offense Defense All American Bowl game over the New Year out in South Carolina. He was named by Scout.com the Defensive player of the game.

wheres the Young kid that played DE the year before at north. the one who went on to play at ku. He put up ridiculous stats his junior and senior year before getting hurt. Nothing against Vincent but young was much better

then why didnt he make it?