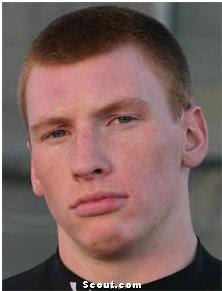 Anthony Parks gets the nod at the second receiver position on the All-Decade team, although it’s a tossup as to whether he was a better receiver or defensive back during his time at Olathe East. Given the fact that Parks went on to play receiver in college, I slotted him as a receiver.

Parks was an essential part of Olathe East’s “rebirth” in the early to mid part of the 2000s. The football program had been struggling with mediocrity, putting up sub .500 records consistently throughout the late 90’s and early 2000s. The breakthrough came in 2002, Parks junior year, when Olathe East came within two points of defeating Olathe North in the Sub-State game to advance to the state championship. Olathe East finished that season with an 8-4 record, but even that number didn’t tell the whole story of how well Olathe East finished off the season. During the year Parks emerged as perhaps the top defensive back in the league, intercepting 11 passes from his cornerback position, while also being a constant threat as a receiver on the offensive side of the ball. Park’s personal highlight of the season was when he recorded four interceptions against SM North, in a game that was televised to all of Kansas City on KC Metro Sports. Parks was named All State First-Team Class 6A and a First-Team KC Metro Sports receiver following the season.

Parks and Co. had big expectations for the 2003 season, and they met them starting the season 10-0. Parks was relentless on both sides of the ball (and as a return man), but really stood out as receiver where he caught 42 passes for 750 yards and 11 touchdowns. The season came to a jolt when Olathe East was upset by Blue Valley North in the Sectional round of the playoffs. As for Parks, his publicity was just beginning. Parks was named First Team All-State Class 6A as a receiver and also First Team at the Defensive Back and Receiver positions by KC Metro Sports.

Parks spent two seasons playing receiver at Butler C.C., and then elected to play at Oklahoma State, among a host of other Division One offers. After earning a starting spot for the Cowboys, Parks was injured and took and MRI scan. It revealed that Parks only had one kidney, a condition unknown to the Parks at that point in time. Due to the severity of the issue (a kidney injury could have effectively killed Parks) he was forced to stop playing football at Oklahoma State.
Posted by Eli Underwood at 8:30 AM

thought this kid was an absolute punk. Sucked he was so good at football.