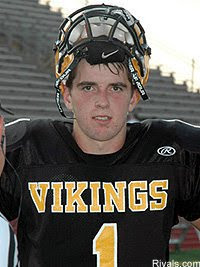 Following a devastating broken leg as a sophomore in 2004, Blake Lawrence emerged in 2005 ready to make his presence known to the Sunflower League. He did just that. Starting at an outside linebacker position Lawrence totaled 90 tackles, 13 of which were for loss. He also added four sacks and forced four fumbles. His play helped lead SM West to a 9-2 record and Sectional Round berth in the playoffs. Following his junior campaign Lawrence received First Team All-Sunflower League honors, as well as quite a bit of Division One interest from schools across the country. 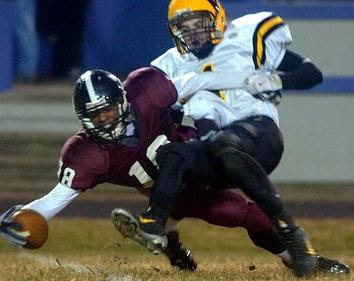 During the summer of 2006 Lawrence received offers from Nebraska, Kansas, Colorado, Missouri, Kansas State, Michigan State, Texas Tech, and Arizona State. Lawrence was regarded as the top football recruit in the state of Kansas, and ultimately committed to play at Nebraska.

As a senior in 2006, Lawrence took on the role of quarterback, and switched from the outside linebacker position to safety. The moves worked out well for Lawrence. As a quarterback he passed for 1,346 yards and 15 touchdowns, while rushing for 483 yards on 71 carries, and scoring 16 rushing touchdowns. On the defensive side of the ball Lawrence made 60 tackles, two sacks, and collected three interceptions. Following a perfect regular season, Lawrence helped lead SM West’s run through the playoffs to its first state championship game in over 20 years. SM West fell 21-14 to Hutchinson in the state championship game, and finished the season 12-1.

Following the season Lawrence was named All-State Class 6A, Kansas Top 11, and Gatorade Player of the Year in Kansas. He was also First Team All-Metro Sports as a defensive back, and was named the KC Metro Sports Defensive Player of the Year, in addition to being a finalist for the Simone Award. Lawrence went on to play outside linebacker at Nebraska. After sustaining numerous concussions, Lawrence had to give up football for good in the Fall of 2009.
Posted by Eli Underwood at 12:44 PM

Blake is my best friend!

Im must know who is the last DB?

Is he still playing at Neb?

no you tard, he was done with that and is slaying in london