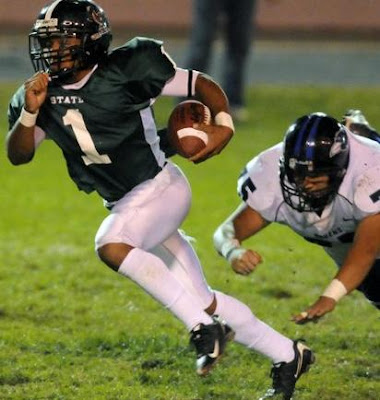 Common knowledge in football is that a quarterback should be tall enough to see over his offensive lineman so he can effectively see down field when passing. Camren Torneden spent his two years as Lawrence Free State’s starting quarterback dispelling this idea.

A few quarterback injuries early in the 2008 season left Free State coach Bob Lisher in a quandary of who to start at quarterback in replacement duty. Ultimately Lisher decided to start Torneden, hoping the dynamo athlete could mock some of the big plays Ryan Murphy delivered out of the zone read option offense several years before. That coaching decision may have proven to be the best of Lisher’s coaching career, as Torneden did little to disappoint.

After a bit of a rough start at 3-3, Torneden and the Firebirds began clicking and reeled off six straight victories to reach the 6A state championship game. Along the way they beat heavily favored units from SM Northwest, Olathe North, and Blue Valley. Free State lost the state championship game to Junction City 19-14, but their run with Torneden as quarterback was incredible. He had amassed 1,362 rushing yards and 13 touchdowns, in addition to 1,042 passing yards and 10 touchdowns in 12 games as the starting quarterback. Torneden received First-Team All-Sunflower League honors for his efforts as a junior.

Free State graduated a very talented senior class in 2009, but with Torneden at the helm their chances of making another state title were still just as good. Free State went 7-2 during the 2009 regular season, then beat Olathe East 38-7 in the Regional Round of the playoffs to advance to Sectionals to play Olathe North. Despite three touchdown passes from Torneden, Free State wasn’t able to repeat their playoff magic again as they lost to eventual state champion Olathe North 41-28.

During the season Torneden put up 1,362 yards and 13 touchdowns through the air, and rushed for 935 yards and 11 touchdowns. He also returned three punts for touchdowns, and played cornerback on defense. He was once again First-Team All-Sunflower League at quarterback, in addition to garnering First Team All-State Class 6A honors. All told, Torneden’s 5,000 plus career all-purpose yards were amazing considering he was a starting quarterback for only two seasons—and significantly shorter than the “prototypical” quarterback.
Posted by Eli Underwood at 4:23 PM

What about Mike Keese?

There were alot of really talented QBs during the decade and it was tough deciding on the top two. Most "All Star/Decade/State" football rosters only include one quarterback, but I felt the list had to be expanded because of the talent at the position.

Guys like Keese, Mack Brown, and Alex Carder were all up for consideration, but I felt Torneden and Miller were the two best--and both had the ability to take over a game on their own with their dual-threat skills. Contrary to Keese, Brown, and Carder who were pocket passers.

Another footnote was that Miller and Torneden both started on defense, which made their offensive feats that much more impressive.

Can't disagree with you there. Just kind of weird thinking Keese didn't make the cut.

I think Carder was overrated his whole time at NW. Nitpicking here but SMNW was not heavily favored against Free State. They just lost Bryce Atagi at the end of the season. He was the workhorse of that offense and was a stud at strong safety.

Not to sound rude, but what does Miller and Torneden playing defense have to do with their QB play? Shouldn't they be under ATH if there defense played that much of a factor in them making this All-star Team?

It really had nothing to do with the selection process...but in the argument of why they were the top two QBs, it makes their offensive accomplishments that much more impressive when you consider they played both offense and defense.

Carder, Brown and Keese received breaks when the offense wasn't on the field. Miller and Torneden on the other hand, quite honestly, never left the field--and they still produced as solid of offensive numbers.

That said, even if all five of those quarterbacks had only played offense, I still would have chosen Miller and Torneden. I think they were easily the two best (along with Moomau, but Moomau was a better defensive back).

Terrible pick eli, but mike keese are you serious....? kill yourself who ever wrote that. Jackson or brown are the other two obvious choices. you could even make an argument for B. lawrence in the spot and i actuality lawrence being the only Qb other then Brown (Colorado) to be offered by a D1 to play Qb does make a strong case for him being the other quarterback listed. (Missouri)
But understanding the one player one position rule i would have acepted Brown or jackson over a short scat back playing Quarterback out of necessity. 10 public lashings eli. and dont give me bull inflated passing stats to try and legitimise the pick eli. This football fan is not buying! (Jerk)

To the last commentor's remark of a "short scatback's inflated numbers". If anything the numbers are deflated. I've watched his entire career. So, just what are you saying? If he were 3 inches taller he would have been one of Kansas' top D1 recruits. If you knew anything about real ball you you wouldn't have even made that comment.

Mack Brown receieved a "try" at Colorado because his dad was Gary Barnett's room mate at Missouri. Helps when your dad can be your high school coach and call his old roomie to let you be on the field with D-1 players. Mack did not have the game for Colorado but did have a nice career at Baker. How did he play at North anyway when he lived in Blue Valley area?