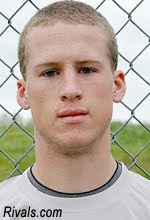 Stat to Note
In his career at Olathe Northwest, Bandy has caught 24 passes for 387 yards and five touchdowns, which equates to a wowing 16.1 yards per catch. He's also recorded 33 tackles and an interception defensively, in addition to manning the punting duties.

Scouting Report
What really stands out about Bandy is his ability to get yardage after the catch. He has tremendous speed to burn--he's been one of the fastest players in the league the past few seasons--and he seems to have a knack for alluding defenders.

The interesting thing is that Bandy is the type of kid who is faster in pads. While Rivals.com lists his forty time at a decent 4.69, he certainly looks like he possesses 4.5 speed with pads on. This phenomena was much the same with former SM West All-Decade receiver David Leonard, who ran an okay 4.75 forty, but outran most defenders with ease.

Bandy holds the preseason title as the top receiver in the Sunflower League for good reason. He certainly has the ability to keep that title if Olathe Northwest is able to get the ball in his hands enough in 2010. It will also be interesting to see how much Bandy develops his skills at the cornerback position.
Posted by Eli Underwood at 12:23 PM

Kid is an athlete. Started in 3 sports as a sophomore, and was all league in them as a junior. His supporting cast wont be much this year though.