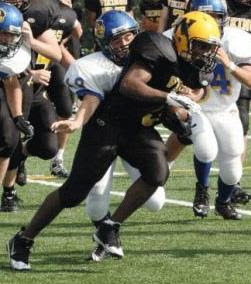 Stat to Note
Last season as a junior, Livingston split carries in the SM West backfield and still managed to churn out 706 rushing yards on 105 carries, producing an impressive average of 6.7 yards per carry.

Scouting Report
Livingston's game, in many ways, is very similar to that of former SM West running back DJ Barnett. Barnett was short in size and stature, but he had an incredible burst and was always capable of taking a carry the distance. Livingston runs with a similar burst and may even possess better speed overall.

Barnett put out 1,900 yards carrying the workload for SM West as a senior in 2004, and while Livingston may be capable of totalling that many yards, he probably won't have to. Livingston will likely split carries again in the Viking's backfield with fellow senior Cordi Pascal. This dual running back system seemed to keep both backs fresher, longer, last season for SM West, and it should be just as effective in 2010.

In the final regular season game of the 2009 season against SM East, Livingston scored touchdowns on runs of six, 47, and 90 yards--the last of which crushed the Lancer's chances of an upset. Livingston's strong finish to last season is perhaps a snapshot of what we should expect from him in 2010.
Posted by Eli Underwood at 4:24 PM