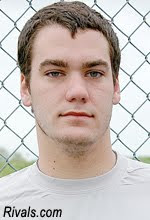 State to Note
As a junior Goodger was chosen First Team All-Sunflower League on offense as a tight end, and defensively as a defensive lineman. It was the first time in awhile a Sunflower League junior had been named first team on both sides of the ball.

Scouting Report
Goodger is a very solid all-around player and probably the best returning lineman in the Sunflower League.

On offense Goodger switches between the tight end and fullback positions--he is equally lethal at both. At 6-foot-5 he has great size and he uses it to his advantage in everything from catching passes to sealing off smaller defenders at the second level of the defense. With workhorse running back John Hauk gone with graduation, Goodger will probably see his carries at the fullback position increase in 2010.

Defense may be Goodger's forte. He has long arms which allows him to easily control and shed offensive lineman, and he seems to play much quicker as a defender. Once again, his great size makes it hard for quarterbacks and running backs alike to allude him.

Goodger is the most prominant name returning for a SM Northwest team that has many question marks surrounding it. The Cougars finished the 2009 season a disappointing 5-4. If the team is going to make it back to the playoffs in 2010 alot will be riding on Goodger and how well he leads the team.
Posted by Eli Underwood at 10:58 AM

Picking the Top 2010 Sunflower League TE/DE is going to fun this year. Word is out that Brent Guiser has some serious game and according to the an article published in the KC Star, ". Guiser is poised to emerge as perhaps the most complete tight end in the Sunflower League" He will also be odds on favor to take the 2011 6A State Title in Javelin with his monster arm.

I've heard about Guiser's prowess in track...should be interesting to see if he develops into one of Olathe East's top players this season.

Goodger in a recently played 7 on 7 game out performed Guiser but its 7 on 7. My Nod for top player goes to goodger hes already proven himself to the be conferences top d-linemen and he was first team tightend last year.

Speaking of 7 on 7 it is a none stop shot out. More scoring than Arena football. Tonight at 6pm on the Shawnee Mission North District Field two of your Simone projections, Brandon Willingham (Olathe East) and Bubba Starling (Gardner Edgerton) will be on field together for the first time ever. It will be fun and look for Guiser to pull in multiple TD's as he has in each of the 7 on 7 contests this summer.

People may have set bar too high for Guiser here. He must worry about being the best tightend in his own city before being the best in the conference as Kyle Swartz of Olathe North recieved 2nd team honors while Guiser did not even recieve honorable mention.