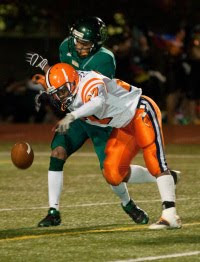 Scouting Report
Fulson can be likened to a heat seeking missile when it comes to chasing down ballcarriers. His 12.5 tackles per game as a junior illustrate this idea the best.

Fulson is somewhat undersized for a linebacker, but he makes up for it with his athleticism. In track and field Fuslon was a member of Olathe East's top notch 4x100 relay team, as well as being one of the top long jumpers in the state of Kansas. Fulson's speed and talent cover for any shortcomings of size.

As a senior Fulson should once again be among the top tacklers in the league, if not the best. He will be one of the few returning starters on an otherwise unproven Olathe East team, and he will be expected to be a dominant force in leading the Hawks. It should also be noted that Fulson received carries on the offensive side of the ball last season, and he may be seeing an expanded role in the Olathe East backfield in 2010.
Posted by Eli Underwood at 7:37 PM