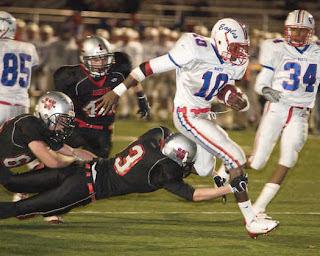 Stat to Note
Last season Simmons split time at the quarterback position with David Blazevic, but Simmons was really just a glorified running back rushing for 1,034 yards on 128 carries.

Scouting Report
With his commitment to play football at Kansas now official, Simmons will have the "Division One" tag to live up to during the season. He projects as Olathe North's starting quarterback and safety and will play a vital role in the Eagles attempt at their second state championship in as many years.

Simmons' speed is what sets him apart from the majority of the Sunflower League (a common theme among the Olathe North skill position players). While it's hard to imagine Olathe North putting any more of an emphasis on the running game, it may be the reality with Simmons as the full time quarterback. Last season Blazevic would be subbed in to throw the passes, but with his graduation, that task may now be left to Simmons who isn't quite a polished passer.

Regardless, Olathe North's emphasis is going to continue to be running the football for success. Simmons could very easily eclipse 1,500 rushing yards in 2010, filling some of the void that will be left with James Franklin's graduation.

Defensively Simmons will be the center point of what should be the top secondary in the Sunflower League. He, along with Dominick Wilson and Adonis Saunders should have no problem shutting down opposing passing attacks.

Posted by Eli Underwood at 4:04 PM

i've said it over and over, Simmons is nothing special. All hype, and a beneficiary of James Franklin, and North's o-line last year.

This is why you area not very smart. Simmons is a very good player and has fit into the north system well. Run Run and Run again. 8 State Championships and counting!!!!!!!!

If he has the type of success he did last year, this year when teams will be keying and planning for him then i will be surprised. No one knew about this kid last year, took the league by surprise. But when you have the o-line he did, and when you have james franklin next to you whose getting all the attention of the defense then i sure hope you can find some openings.

OMG, watch the video and see how good he is in the open field where there are no linemen. He is pretty studly!