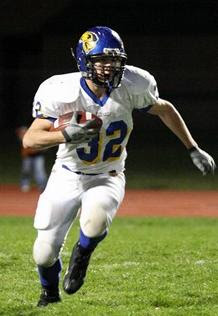 Stat to Note
Olathe South's spread offense restricted Sands' rushing totals as a junior, but his biggest game of the season came against SM East when he scored touchdowns in three different ways. A three yard run in the first quarter, and 82 yard kickoff return in the second quarter, and a 57 yard reception in the fourth quarter.

Scouting Report
While Sands isn't exactly a household name among returning Sunflower League running backs, he may be on track for a breakout season in 2010. Olathe South has been making the transition to more of a run based offense during the offseason, to better utilize the depth and talent the Falcons have returning on the offensive line.

What's more, Olathe South head coach Jeff Gourley was quoted by the Olathe News' Tod Palmer as saying "I’m going to boldly predict that he [Sands] rushes for 2,000 yards next year [2010]." The statement was very bold, especially considering the fact that Sands only received honorable mention honors last season for his efforts as a running back. On top of that, only four Sunflower League running backs have rushed for over 2,000 yards in the past 10 seasons (Sproles, Mack, Bouknight, and Franklin, all Simone Award winners).

But, confidence is huge in high school football, especially when it's coming from the head coach. Sands will get his fair share of carries, and running behind arguably the league's top returning offensive line will certainly help.
Posted by Eli Underwood at 4:45 PM

If this guy even breaks 1350 yards I would be surprised. That is 150 a game in 10 games. They must plan on him carrying the ball 30 times a game. Gourley is a little silly to show his cards on the 2000 yard statement.

If Gourley is running what he ran while at Belton, this kid will get AT LEAST 30 carries a game. BTW, playoff games count for the season total for yards. I don't think Franklin had 2000 by the end of the regular season last year. It's still quite the feat.