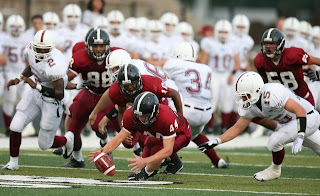 State to Note
Sorem (shown making a fumble recovery on the right) ranked third in the Sunflower League in tackles last season, recording 96 in nine games.

Sorem and company were looking forward to a big 2009, but things just seemed to head further south as each game passed. The Chesty Lions went 1-8, tying for the worst record in school history.

Sorem was overlooked perhaps more than any player in the league. Despite a very impressive average of 10.7 tackles per game, Sorem was only named honorable mention All-Sunflower League as a junior.

Accolades aside, Sorem is without a doubt one of the best returning defensive players in the Sunflower League. Sorem makes up for his lack of size with incredible effort and football savvy. Lawerence High's hopes of turning around their program in 2010 rests on players like Sorem.
Posted by Eli Underwood at 1:50 PM