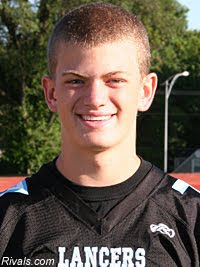 Stat to Note
While splitting quarterback duties with Robby Moriarty as a junior, Schrock completed 53 passes for 545 yards.

Scouting Report
Schrock fits the profile of the bona fide high school quarterback prospect. Standing 6-foot-4, he has no problem seeing over his offensive line, and he has a great arm for slinging the ball downfield. From time to time Schrock even operates the veer option play, using his 210 pound frame to punish defenders.

This past week SM East head coach Chip Sherman named Schrock the starter over Moriarty for the 2010 season. With that question mark now taken care of, Schrock and his teammates can focus completely on the upcoming season--one featuring higher expectations than the Lancer football program has had in years.

Much of SM East's success will come down to just how well Schrock performs receiving all of the attention at quarterback. He has the physical tools to be the best passer in the Sunflower League, and it will be interesting to watch how he leads the Lancers.
Posted by Eli Underwood at 4:07 PM

Kids got a good frame. i think he lost some of his o-line though, Does east have any returning starters upfront