A mere three weeks remain before the kickoff of the high school football season. The following is my first installment of Sunflower League player ratings for the 2010 season. Player ratings are similar to the team based Power Rankings. On a weekly basis I name the five players who I feel are performing best, in addition to honorable mentions. Player's ratings shift nearly every week.
At the end of the season the player who I have as tops in the Player Ratings is named my Sunflower League MVP for the season.

2010 Top Five Player Ratings - Preseason
1. Brandon Willingham, Running Back, Olathe East: Willingham (left) was one of the few juniors who appeared in my top five ratings last season. This year he begins atop the list. Blessed with great athleticism, Willingham will play running back, defensive back, and return kicks and punts for the Hawks. Last season he rushed for 909 yards and nine touchdowns on offense, and made 64 tackles and two interceptions on defense.

2. Victor Simmons, Quarterback, Olathe North: In June, Simmons made a verbal commitment to play football at Kansas. While his recruitment is more or less over, the pressure to perform will really begin heating up. Simmons will operate out of the quarterback position in Olathe North's vaunted Wildcat-Option attack again in 2010--last season he rushed for 1,034 yards. The defensive side of the ball, however, is where we may see the biggest improvement from Simmons. He is slotted as a defensive back again for Olathe North, and it will be the position he will play at Kansas. 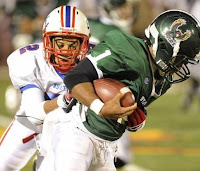 3. Adonis Saunders, Running Back, Olathe North: First it was Arland Bruce, then Eniak Mpwo, Beno Gore, Darren Sproles, Maurice Mack, Jim Bouknight, Justin Gore, Josh Gore, James Franklin, and now Saunders (left, on left). The speedy senior will be taking over a position at Olathe North that has featured five Simone Award winners, and nine All-State performers since the 1995 season. The question is can Saunders carry on the torch? For now, his prospects look good. The former Class 6A 100-meter champ will receive plenty of carries, and should also be a stud from his cornerback position.
4. Will Livingston, Running Back, SM West: Livingston is prepped for a big senior year. He rushed for just over 700 yards as a junior, and his great set of wheels should make up for any shortcomings he has with his size (5-foot-7, 165). SM West's offensive game is based around running the football effectively, and Livingston will receive as many carries as he can handle.
5. Nick Sands, Running Back, Olathe South: Sands is kind of the wildcard of this list but with Olathe South's change to a running based offense, he could be in for a big season. Expect the low-centered power back to receive upwards of 25 carries a game. Olathe South head coach Jeff Gourley predicts Sands to surpass the 2,000 yard rushing plateau this season--if he does that, he may find himself atop the list in November.
Honorable Mention: Drew Humphreys, Drew Goodger, Kyle Swartz, John Schrock
Posted by Eli Underwood at 3:41 PM

Do you really believe Sands to be the 5th best player in the league, or is he at #5 based off the hype around him coming into the season? Also, who is the other running back SM west has got coming back, and also isn't West's QB supposed to be pretty good?

Don't hate on O-South, don't forget that South has 4 out of 5 lineman returning from the second best offense in the Sunflower League last year. That would give an average running back 1000 yards. Watch Sands' highlights that was linked on this pages spotlight.

Im not doubting sands to be a good player, nor am i doubting OS as a team. i think they will be very good this year. But i am just curious if his placement on this list is based off the hype around him, or based on what he has done to earn being considered one of the top 5 players in the league. I have to think there are more returning players that have done more in the league to date, no disrespect to Sands or OS.

After watching numerous Sunflower League games, it was evident that many of these players are not deserving of there rankings. Saunders has never started a varsity game at running back and already he's getting Simone talks, Schrock was the Quarterback used for the run and play action game, and Livingston was equaled by Pascal...just to name a few obscurities. I have a hitch that these rankings will be dramatically different by the end of the season.

Only one truly deserving on the list is Willingham and Simmons. Both are proven big name players. While who the hell is Nick Sands? Saunders also may deserve the ranking if he steps out of Franklins Shadow from the previous season. And Livingston will see less carries than Pascal

the simmions/ saunders duo will be something to look out for, both have blazing speed with the option look at north im excited to see what the outcome is, the only question is the unproven line...Eli do have any information on any linemen from North other then finley?

Will Livingston will be a stud and get way more carries than Pascal. Livingston looks way bigget than the 165 he played at last year and he was third in the 100 m at state last spring. If he stay shealthy he is my pick to be at the top of the chart at the end of the season.

I agree that this list is full of players that have much to prove. Saunders has speed to burn, but WILL NOT be anywhere close the back that franklin was. I dont buy all the simmons talk and think his commitment to KU is a joke. Who is Nick Sands? Livingston and Pascal will be studs. Are there really no over powering linemen returning?

I know Adonis is Fast, but that doesn't make him a great football player. Did anyone else notice that when Franklin was out of the game, Dominick Wilson (#24) was the one who spelled him, not Saunders (see the ON/BV substate game)?

I agree that Willingham is probably the most legit of all the names listed.

Looking at the stats tab on this page, who is the other kid from south that is the top returning receiver in the Sunflower (Harland)? He seems to have more credentials than the Sands kid.

humm i think olathe north prove everyone on here who was doubting them wrong.

All you guys were wrong, all these young men had a great season and deserved the ratings the received! Congratulations to them all.