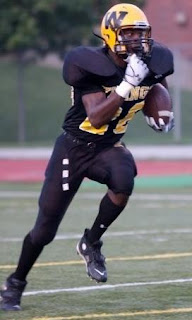 to pass for over 1,300 yards. Schrock received the nod as starter, but Moriarty will be the best backup quarterback in the league and the Lancers won't miss a beat if Moriarty is put in the game.
Offensive Backfield
SM West - Drew Humphreys, Will Livingston, Cordi Pascal, Jordan Chapman, Danny Dowling

Livingston and Pascal (right) combined to rush for over 1,300 yards last season, and the duo looks primed for another big year. Dowling is back as the lead blocker, and Humphreys should be featured running the option quite a bit this year.
Receivers
Olathe South - Kendal Harland, Stephen King
While no team has an outstanding returning core of receivers, Olathe South has the most experience. Harland caught 39 passes for 401 yards last season, and King returns after some decent playing time last year.
Offensive Line 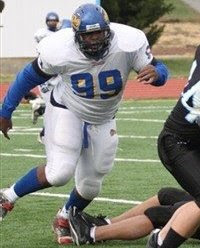 Brown (right) and Kleinsorge have received a good deal of hype this offseason and they should help greatly in Olathe South's transition to a run-based offense. The group has great experience, phenomenal size, and a solid backfield to open holes for.
Defensive Line
Olathe North - Josh Finley, Kyle Swartz
This is perhaps the most depleted area in all of the Sunflower League. None of the first or second team All-Sunflower League members from last season return, with the exception of SM Northwest's Drew Goodger. Josh Finley should be a big time performer for the Eagles on defense, and a walked-up Kyle Swartz will have as big of effect as any defensive lineman in the league.
Linebackers
Olathe East - Adam Fulson, Will Hammer, Vince Gerstner
Fulson returns after a 125-tackle junior campaign, and Hammer and Gerstner should also be among the top linebackers in the league. Olathe East's defensive schemes are set up for the linebackers to produce big numbers (last year three Hawks had over 70 tackles), and this unit should do the same. 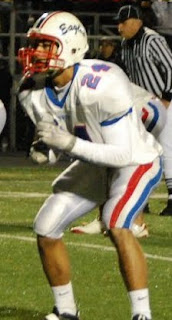 Secondary
Olathe North - Adonis Saunders, Victor Simmons, Dominick Wilson (right)
All three of these players have sub-4.5 speed, and Division One talent. None of the three, however, ranked among the top of the league in interceptions last season. With a year of experience playing together the unit should be tops in the league in 2010 and their interception totals could go up quite a bit.
Special Teams
Olathe Northwest - Nick Bandy, Nick Prologo
Bandy is arguable the league's best return man, and he also handles punting duties for the Ravens. Prologo, the kicker, is a kid that returns with a good deal of experience and has the ability to impact close games.
Posted by Eli Underwood at 9:50 AM

Great list. I was really excited when I looked through it and didn't see any Olathe East players. Oh well, gotta throw them a bone every now and then I guess. Kid seems like a good player, though.

West's offensive line is without a doubt the best in the league. You can't beat 5 returning starters