Week Two Matchups
All games times 7 p.m. unless otherwise noted
SM North (0-1) at SM South (0-1) (Thursday Night Game)
Neither of these teams faired well in week one, as SM North lost by 35 and SM South by 27. That will all be in the past for the team that can collect a win in this Thursday night game. Last season this was one of the most competitive and exciting games during the entire season as SM South claimed a narrow victory in overtime. Hopefully the same will be said for this year's game.
Olathe North (1-0) at Olathe South (0-1)
Olathe South's defense was torn to pieces last week against Free State, and it doesn't get any easier for them this Friday as they take on arguably the most powerful offense in the league in Olathe North. This game has been chosen by KC Metro Sports as the HyVee High School Game of the Week, and it will be broadcasted to the Kansas City metropolitan. Both teams have the audience to make a statement about their abilities.
Lawrence (1-0) at SM East (1-0)
Was Lawrence's dominant week one victory simply the result of playing a bad Leavenworth team? Is SM East really as good as the 24-0 win they shelled out against SM Northwest? This game should help in answering those questions and more. Both these teams lost their first two games last season, so a reversal to a 2-0 start for the winner would be a big boost early on.
SM Northwest (0-1) at SM West (0-1) 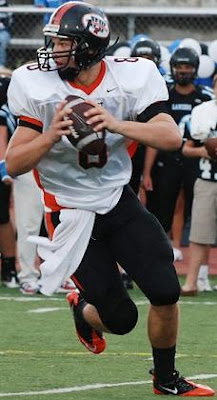 Even though it's only week two both of these teams are in desperate need of a victory. SM West has lost two straight games going back to last season (the first time that has happened since 2007) and SM Northwest, led this season by quarterback Stephen Mangelsdorf (right), is a very average 5-5 since the beginning of the 2009 season. Both schools have been the face of Shawnee Mission School District football since the mid-2000s, but SM East is slowly but steadily making a push at that claim.
Lawrence Free State (1-0) at Leavenworth (0-1)
Perhaps the most exciting thing about this game is the venue it will be played in. Leavenworth will be hosting their first ever football game at their brand new stadium. After a hapless effort against Lawrence last week, it's hard to imagine the Pioneers being competitive against what appears to be an offensive juggernaut in Free State. However, the new stadium may give Leavenworth a little kick in their step that they lacked in week one.
Game of the Week
Olathe Northwest (1-0) at Olathe East (1-0)
So what if Olathe Northwest is 1-17 vs. Olathe schools since their varsity inception in 2004? Now is as good of time as any for the Ravens to claim a statement win amongst their Olathe counterparts. Olathe East looked nearly flawless in their 42-7 win in week one, but Olathe Northwest was pretty impressive themselves winning with ease, 41-14. This game features two of the biggest playmakers in the Sunflower League (East's Brandon Willingham and Northwest's Nick Bandy) and it should make for an exciting Friday night.

Photo Courtesy the Shawnee-Dispatch
Posted by Eli Underwood at 10:31 AM

Weather may be a factor Friday night, sounds kind of rough...conceivable some games could be played on Saturday. I think this was real problem for SMW last year against Free State. Not to make excuses but wearing the home black in the hot sun is not a good recipe for success.