Top 5 Player Ratings
Player Ratings are subject to change on a week-to-week basis
1. Brandon Willingham, Running Back, Olathe East
Week One: 12 carries, 127 yards, 1 TD; 15 yard TD reception
Willingham played great in his senior debut Friday. On Olathe East's first offensive play of the game he took a carry 44 yards. A good omen to say the least. With the emergence of fellow senior running back Austin Fulson, it looks like Willingham will be splitting carries at the running back position again. This worked great for the Hawks last year, and if anything it allows Willingham to be more dynamic defensively and in the return game. 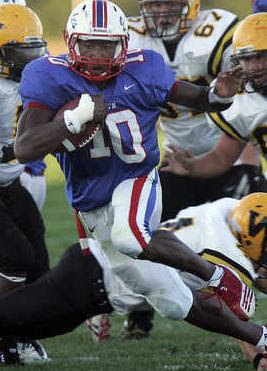 2. Victor Simmons (right), Quarterback, Olathe North
Week One: 23 carries, 118 yards, 1 TD; 1-of-5 passing, 19 yards
Based on statistics alone it doesn't appear that Simmons became a polished passer during the offseason--but it doesn't look like it will make much of a difference for the Eagles. Simmons was, as usual, nearly impossible to tackle on Friday. His highlight play came in the second quarter when he busted through the middle of the SM West defense for a 41 yard touchdown run.
3. Adonis Saunders, Running Back, Olathe North
Week One: 6 carries, 160 yards, 2 TDs
Saunders first carry of the season went for 77 yards and a touchdown, and his first carry of the third quarter nearly matched it, when he ran 72 yards for a touchdown. It seems Olathe North has found the next running back to carry on the school's legacy at the position. It will be interesting to see how many yards Saunders can put up with more carries.
4. Will Livingston, Running Back, SM West
Week One: 22 carries, 69 yards, 2 TDs; 75 yard TD reception
Livingston's rushing yardage wasn't very impressive, but his three touchdowns in the fourth quarter were. SM West will need to develop more offensive threats to take some of the focus of opposing defenses off Livingston. On Friday, he was the Viking's offense.
5. Dylan Perry, Quarterback, Lawrence Free State
Week One: 9-of-13 passing, 150 yards, 1 TD; 22 carries, 132 yards; 1 defensive interception
Perry replaces Olathe South's Nick Sands in the #5 slot after a breakout home opener against the Falcons. It would have been hard to predict such a dominant performance from the Firebird's new quarterback, but he played as good of a game as any player in the Sunflower League in week one.
Honorable Mention: Preston Schenck, John Schrock, Austin Fulson
Week Two Power Rankings
*Power Rankings are subject to change on a week-to-week basis
**See previous post for commentary on Rankings 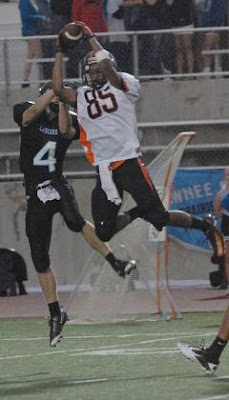 Well, other than my underestimation of the Olathe NW Ravens, I was perfect last week even down, sadly, to predicting Drew Humphries would get injured for SMW. Now, true, the injury occurred on defense not offense but still. I'd be curious to see if Eli can get us a report on his condition. Some interesting games this week:

ON@OS The Falcons were exposed by Free State last week with the same weakness that has plagued them the last two season: no defense. There seems to be no upper limit to what the powerful Eagle offense can produce this week and there will be no mercy for the cross town rivals. This one could get ugly...ON 60 OS 21

SME @ LAW An intriguing week 2 matchup. The Lancers showed they're for real last week and although the Lions were impressive, it was against Leavenworth so it's hard to say what that means. I look for Chip Sherman's team to survive their first test with their rock solid defense...SME 21 LAW 10

LFS @ LV As I thought, reports for the Firebird's demise are greatly exaggerated. Regardless this week should not prove much of a challenge...LFS 49 LV 0

ONW @ OE Another interesting game in week 2. I clearly underestimated the Ravens last week but by how much? I've seen them picked in the lower half of the league and also ranked in the top five in the state - which is correct? While the win over SMS didn't tell us much, this game will. I've got to go with Hawks and see if the Ravens can make a monkey out of me two weeks in a row...OE 27 ONW 17

SMN @ SMS This week's 'who cares' bowl, both teams took a thorough drubbing last week. This game may be a toss up but until the Indians show me they can score, I've got to go with the Raiders...SMS 15 SMN 0

SMNW @ SMW Vikes got off to a horribly slow start last week but showed flashes at the end. Can Drew Humphries go this week? Sophomore QB Armani Williams did a very serviceable job in relief last week so it won't matter against the Cougars but they will at least need Drew on defense the following two weeks. Look for Will and Cordi to run wild this week...SMW 35 SMNW 0

Humphreys is rumored to be "questionable" for Friday's game vs. SM Northwest, but I try not to comment too much on injuries unless they are significant.