Olathe North
The Eagles ran the ball 46 times for 353 yards (7.6 ypc) and four touchdowns against SM West, a school known for its defensive work. The dominating effort erased any doubt as to whether or not Olathe North would be able to run the ball as effectively as they did last season.

SM East
The Lancers couldn't have asked for much better of an effort in week one. Not only did they garner their first victory of the season, but they also shutout a district rival in the process. At the very least it looks like SM East has really improved from their 4-6 campaign last year. 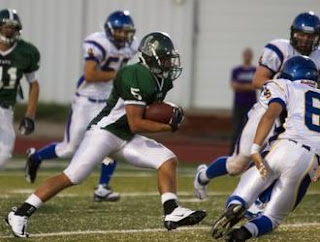 Lawrence Free State (right)
The losses of Camren Torneden and Kirk Resseguie did little to dampen the Firebird's offense. In fact, their offense looked as potent as ever in the their 45-23 victory over Olathe South. If they can keep playing at that level few teams will be able to keep up.

Olathe South
The Falcon's "new look" offensive run game did little to impress in week one, and it doesn't look like there was much focus on improving what was a horrendous defense in 2009.

SM Northwest
The Cougars had a great shot at revenge against the team that kept them out of the playoffs in 2009, but they failed to do so against SM East. Getting shut out just added insult to injury.

SM North
The Dennis Grayless era opened in a similar fashion to the way the past five seasons have gone for SM North--poorly. The Indians were playing a talented opponent in Olathe East, but that does little to cover the fact that the team didn't play well in their 42-7 loss. 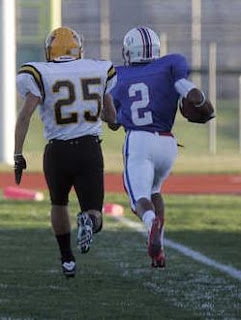 reston Schenck combined to rush for 244 yards and three touchdowns. Schenck also returned an interception for a touchdown.

**Olathe North's Adonis Saunders (right) rushed for 156 yards and two touchdowns on seven carries. His rushing average for the game--22.3 yards per carry.

**Despite his team's loss, SM West senior Will Livingston had an amazing fourth quarter. In a span of seven minutes and 33 seconds, Livingston rushed for a 36 yard touchdown, caught a 75 yard touchdown pass, and added another touchdown run from five yards out.

2. Olathe East (1-0): The Hawks jump to the #2 spot after the SM West loss, and a complete domination of SM North.

3. SM West (0-1): The Vikings didn't looked focused from the start of their game vs. Olathe North. That must change in week two.

4. SM East (1-0): Chip Sherman's group could easily start the season 3-0 if they take care of business the way they should.

5. Lawrence Free State (1-0): The Firebirds were very impressive in their week one victory; Bob Lisher may have the best offensive system in the league.

6. Olathe South (0-1): The Falcon's didn't live up to the preseason hype in week one. Week two only gets more difficult against Olathe North.

7. SM Northwest (0-1): After an opening week loss to SM East the Cougars will regroup and try to even their record against another district rival in SM West.

8. Olathe Northwest (1-0): The Raven's opening win was nice, but they will experience their first true test in week two against Olathe East.

9. Lawrence (1-0): The team Lawrence displayed in their opening win was ten times more impressive than the group they fielded last year.

10. SM South (0-1): The loss of talent to graduation may have hit the Raiders worse than any team in the league.

12. Leavenworth (0-1): The opening loss was bad, but on the bright side the Pioneers will get to play their first home game at their new stadium in week two.