SM East 24, SM Northwest 0 (from Friday)
SM East had a chance to make a statement in their first game of the season, and they did a good job of it. The Lancers got on the board in the second quarter when cornerback Quan Brunt intercepted a Stephen Mangelsdorf pass and returned it 53 yards for a touchdown. At the half SM East was on top 7-0. In the second half the Lancers continued to seperate themselves. A Chase Woofter field goal gave them a 10-0 advantage, and then two John Schrock touchdowns--a four yard run and a 38 yard touchdown pass to Elliot Faerber--put SM East up 24-0. SM Northwest was held to 161 yards of total offense, while SM East produced 268 yards, 207 of which came in the second half.

Olathe North 29, SM West 22
The questions as to how Olathe North would play without James Franklin were answered on their first offensive play when Adonis Saunders took a handoff 77 yards to the house. Later in the first quarter quarterback Victor Simmons weaved his way through the center of the SM West's defense on his way to a 41 yard touchdown run. Then Kyle Swartz pounded in a one yard touchdown plunge to give the Eagles a comfortable 20-0 advantage on SM West heading into halftime. Saunders opened up the third quarter much the way he did the first--taking a carry 72 yards for his second touchdown of the day. The Eagles also added a field goal early in the fourth quarter to grab a 29-0 lead before they began pulling their defensive starters. SM West capitalized with three Will Livingston touchdowns (runs of 36 and five yards, and a 72 yard reception) in the final quarter, but it wasn't enough to overcome to 29 points. 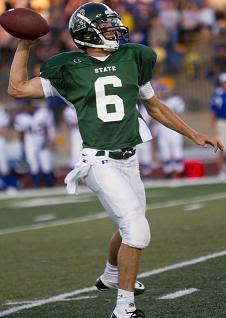 Sunflower League, meet Dylan Perry (right). In his first game the helm of Free State's offense the senior completed nine of 13 passes for 150 yards and a touchdown, and added 132 rushing yards on 22 carries. Free State led 14-3 at halftime, but early in the third quarter Olathe South cut the lead to 4 points when Kendal Harland scored on an eight yard run. Then the Preston Schenck show began. Free State's senior running back scored two touchdowns on runs of three and 48 yards, and also added a 45 yard interception return for a touchdown. The three scores gave the Firebirds a comfortable lead on their way to the opening victory.

Olathe East 42, SM North 7
Olathe East claimed their 12th consecutive opening game win with ease. After SM North's initial drive stalled and their field goal attempt was blocked, Olathe East got rolling and it was lights out. Austin Fulson, previously known for his defensive prowess, broke out on offense rushing for 129 yards on 10 carries and two touchdowns. Brandon Willingham added 121 rushing yards on 11 carries and a touchdown in addition to a 15 yard reception touchdown. SM North's lone touchdown came late in the fourth quarter when Ryan Ruhulessin scored from a yard out to prevent the goose egg.

Lawrence 40, Leavenworth 6
Lawrence High looked like a completely different group compared to last season. The Chesty Lions scored touchdowns on their first five drives, and outgained Leavenworth 328 to 76 in total yards. Lawrence's Darrin Sorem, Charles Jackson and Brad Strauss all scored two touchdowns apiece. Strauss' 11 pass completions were one more than the 10 completions Lawrence recorded for all of 2009.
Posted by Eli Underwood at 12:55 PM