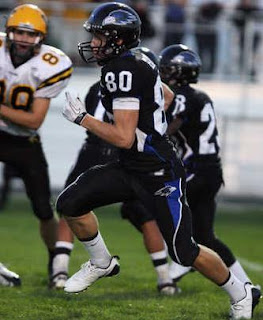 Olathe South (2-2) at Olathe Northwest (2-2)
It seems as if Olathe South has really started to click in recent weeks, and they will be looking to make it three wins in a row this Friday. For Olathe Northwest, this game is another chance at proving their worth amongst the other Olathe schools. The Ravens (led by senior playmaker Nick Bandy, right) have also played well this season and it wouldn't be a surprise to see either team win. It is imperant, however, that Olathe Northwest slows down the Olathe South rushing attack. If not, watch out, it could be a long night for the Ravens.

Olathe North (3-1) at Leavenworth (0-4)
Olathe East dropped 62 on Leavenworth last week, and we hope this game doesn't become Olathe North's version of "anything you can do I can do better." The Eagles certainly have the talent and scoring ability to hang nine plus touchdowns on Leavenworth, but for once it would be nice to see the Pioneers put up a decent fight against a good team.

SM South (1-3) at SM Northwest (1-3)
SM Northwest certainly didn't look stellar in their first win last week, but it was a good win on the road, in Lawrence and the team has some momentum going. SM South has meanwhile struggled quite a bit since their week two victory over SM North (they have manufactured just two touchdowns the past two weeks). There may be quite a disparity of talent between these two teams, despite the even records.

SM North (0-4) at SM West (3-1)
SM West has won their last two games with big scoring outbursts in the fourth quarters. This week the Vikings are hoping that outburst will come a little sooner--plus it's SM West's homecoming, so the added motivation will be there. As for SM North, the Indians would love nothing more than to spoil the homecoming with a major upset--but it's unlikely if they continue to play like they have been the entire season.

Olathe East (4-0) at Lawrence (2-2)
Lawrence has a great opportunity to put their program back on the map if they can pull the upset at home against Olathe East. Lawrence could easily be 3-1 right now had they not screwed up a chip-shot field goal last week, and they really seem to feed off their new home stadium. On the other hand, Olathe East is coming off a blowout victory and it may take the Hawks a possession or two to readjust themselves to a more competitive unit in Lawrence.

Game of the Week
SM East (3-1) at Lawrence Free State (3-1)
I have these teams ranked #4 and #5 in my Power Rankings and based on how both teams have played it seems those rankings could be listed as 4A and 4B. Both teams play great offense--Free State is tops in the league in total offense, and SM East ranks third--and you can plan on some highlight reel type plays Friday. I also like the individual battle at the quarterback position. Dylan Perry should be completely healed from his ankle injury in week three and at full ability, and John Schrock will be looking to bounce back from an OK performance last week. The player who performs better will make a strong case for the title of best QB in the Sunflower League--likely that quarterback will also be collecting the "W."
Posted by Eli Underwood at 4:31 PM

Not just 6-0 last week but within 7 points of final margin in EVERY SINGLE GAME! I'm awesome, eh? I do , however, categorically deny any truth to the rumor that the players log on to the site on Thursday to check my picks to see if they're going to win or lose that week! This week looks pretty easy with only a couple of games in doubt but a huge matchup for SME-LFS with big playoff implications.

OS (2-2) @ ONW (2-2) One of two games between teams with identical records this week that I feel will wind up being no contest. The Ravens could not win against SMW last week despite 5 Viking turnovers, I just don't see them mustering the offense to stay with the Falcons....OS 34 ONW 17

SME (3-1) @ LFS (3-1) Clearly the big game this week. As I said in my District previews this game is crucial in determining first round pairings, the loser here might face a tough road game at OE in round 1. On paper this looks a lot like the SMW-LFS game...awesome Firebird O against stalwart Lancer D, an anemic East offense but good senior leadership for the Lancers. Still, (sorry East Chicken) I feel that Free State has too many ATHLETES for East....LFS 28 SME 24

SMN (0-4) @ SMW (3-1) Vikes through the meat of their schedule now and into the soft gooey middle. Should be easy wins the next 3 weeks but a good chance to work on 4 areas that MUST improve for playoff success. 1) TURNOVERS!!! 2) Stop giving up the big play (having #4 back in the secondary should help with this one) 3) Kick Coverage! and surprisingly 4) Extra points!....SMW 46 SMN 3

SMS (1-3) @ SMNW (1-3) The other game that should be close but I feel will not be. Barring any more goofy play calling, the Cougs continue to get better and cruise here. SMNW 30 SMS 16