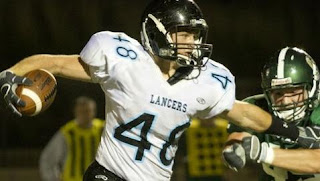 Week Six Matchups
All games times 7 p.m. unless otherwise noted
SM East (4-1) at Olathe Northwest (2-3) (Thursday night game)
It's game three of a tough four game stretch for Olathe Northwest. The Raven's early season success is starting to look a bit tainted (their wins came against SM South, 1-4, and Leavenworth, 0-5). Meanwhile SM East (Lancer's running back Seth Hartman, above) is playing excellent football. The Lancer's offense has been especially dominant, ranking second in the Sunflower League in total offense at 364 yards per game.
Lawrence (3-2) at SM West (4-1) (Thursday night game)
Lawrence High will obviously be fired up for this game after last week's upset of Olathe East. While the Chesty Lions are playing good football, their game against SM West will mark another week in which they're not favored to win. SM West has the longest current winning streak in the Sunflower League at four games and the Vikings won't be overlooking Lawrence after last Friday.
SM North (0-5) at Olathe South (3-2)
Despite some early season hiccups, Olathe South appears to be back on track. The Falcon's stat totals don't jump out at anyone but they have been playing good football and this week six matchup shouldn't change that. SM North will be battling to end a hideous 12-game losing streak stretching back to week three of the 2009 season.
Leavenworth (0-5) at SM South (1-4)
SM South is playing Leavenworth at the right time. Not to say the Pioneers couldn't collect a win in this one, but they really haven't shown us much this season and it's hard to see their fortune changing at SM South. The Raiders haven't played well of late and a win here would instill some much needed confidence heading into district play.
Olathe North (4-1) at SM Northwest (2-3)
SM Northwest has been putting up solid numbers in their past two wins--now it's time to tell if the Cougars have improved much from their 0-3 start. With a district that includes Leavenworth, SM North, and Wyandotte, this will really be the last chance for SM Northwest to prove themselves against tough competition in the regular season. Olathe North can make a case for being the team to beat again in the Sunflower League if they easily handle the Cougars.
Game of the Week
Lawrence Free State (3-2) at Olathe East (4-1)
Lawrence Free State makes the Game of the Week slot for the second Friday in a row. The Firebirds have fallen short in their other two big games this season (home losses vs. SM West and SM East) and they could really use a win here given what appears to be a relatively tough district ahead. Olathe East boasts the league's top ranked defense allowing a mere 166.2 yards per game, and Free State has the top offense at 380.6 yards per game. One of the two has got to give.

All right, back down to earth last week. Congrats, East Chicken, the Lancers got it done...if East and West can both take care of biz this week, it sets up a huge SM show down in week 8. Not one game last week didn't surprise me, if not in the result at least in the way it was played. Some interesting matchups this week:

SMN (0-5) @ OS (3-2) Okay this one not so interesting. Given BVW's humiliating loss to BVSW last week, the Falcons look back on course for a playoff berth. Certainly will have no problem this week...OS 35 SMN 7

SME (4-1) @ ONW (2-3) Can the Lancers stay focused for their third straight road game after their huge win last week putting themselves solidly among the top teams in the league? Should be solid defense on both sides of the ball but East is too much for the Ravens...SME 24 ONW 12

ON (4-1) @ SMNW (2-3) These two teams put up 128 points last week. Cougs are looking much better and playing on their home turf could give the Eagles a battle. ON needs to win this game to avoid the possibility of falling to the #4 seed. I think they have too much speed for the Cougs though...ON 28 SMNW 17

LAW (3-2) @ SMW (4-1) Suddenly this looms as a big test for the league leading Vikes. The Lions made the most of the opportunities OE gave them last week, West must avoid the same sort of charity here. SMW won this game 31-0 last year and I have to think they still have the talent to prevail if they can play their best game...SMW 30 LAW 17

LFS (3-2) @ OE (4-1) Both teams come off hugely disappointing losses last week, who can find the heart to get back on track in this last pre-district game? I'm going to go upset special here...LFS 27 OE 26

Lawrence loses leading receiver Anthony Buffalomeat for the season with mononucleosis. Also started at cornerback and was the punter. Will still have another year as he is only a junior.

Impaler knows his Sunflower league football thats for sure. I wouldve really liked Lawrences chances this week against SMW but with out buffalomeat I dont like that match-up as much. although lawrence creates turnovers and west is turnover prone... one to look out for. the other game that interests me is ON v SMNW. NW has turned it on as of late and I like their WR/DB, heck of an athlete. anyway looking forward to SME v ONW tonight for many reasons: 1. will be my last game I watch in person this year as I move to colorado next week 2. SME v Todd Dain former East coach, would love nothing more than East to exact some revenge from last year. good thing East streams all their games live on-line or else Id recosider the move... GO EAST BEAT DAIN!

The best thing that ever happened to SME was Dain leaving...I could not believe they didn't give that job to Coach Callahan. Maybe the best thing to happen to north other then their 8 rings was Callahan going to SMW and not ONW.

Callahan is an outstanding coach and person and am lucky i got to play for him.