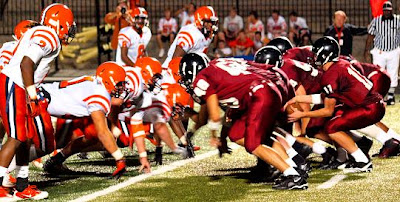 Olathe North 76, Leavenworth 0
Olathe North scored 11 touchdowns and Leavenworth scored zero. That sentence pretty much sums up the week five matchup between these two teams. Nine different Eagles were in on the scoring, including Adonis Saunders who scored two first quarter touchdowns on runs of 18 and 49 yards. The loss marks the second game in a row in which Leavenworth has surrendered over 60 points.
Olathe South 21, Olathe Northwest 13
Olathe South scored the game's first 14 points and then did a stellar job of holding off Olathe Northwest's run game to claim the victory. Nick Sands scored both the early touchdowns for the Falcons, on runs of one and eight yards. Olathe Northwest responded before the half when Justin Pamatmat churned in a four-yard touchdown run. Nick Prologo put the Raven's within four points when he booted a 26-yard field goal late in the third quarter, but the lead was never overcome. Olathe South's Frankie Seurer took an option keeper 64 yards to put his team up 11 in the fourth quarter. Another Prologo field goal was all Olathe Northwest was able to add late in the game.
SM East 28, Lawrence Free State 21
After a scoreless first quarter SM East put together a major 18-play drive that ended with a one-yard touchdown run from Jeff Cole. Free State's Dylan Perry responded with a 19-yard touchdown run, and the half ended with Free State on top 7-6. Adam Lowe's 60-yard run at the start of the third quarter set up John Schrock for a one-yard touchdown run and a two pointer conversion which gave the Lancers a 14-7 advantage. SM East added another touchdown on a two-yard run from Cole to gain a 14 point edge. Perry responded with a 64-yard touchdown run, to which Schrock scored another rushing touchdown to keep SM East comfortably ahead. A late touchdown run by Henry Vaeono put the Firebirds within a touchdown late.
SM West 41, SM North 0
It was all SM West on their homecoming, and for the third week in a row their scoring explosion came in the fourth quarter. Armani Williams connected with Jordan Chapman on a 69-yard touchdown pass in the second quarter that gave the Vikings a little breathing room before halftime. They scored again in the third quarter on a one-yard run from Tre Burt to go up 14. The onslaught came in the fourth quarter when the Vikings rolled out four touchdowns to push the lead to 41 points.
SM Northwest 51, SM South 12
SM Northwest forced a safety early, and then went on to score six unanswered touchdowns. The score was 44-0 before SM South made an entry in the scoring column. The Cougars scored five of their seven touchdowns on runs, with the other two coming on passes of three and 52 yards by Stephen Mangelsdorf.
Photo courtesy Mike Odrowski
Posted by Eli Underwood at 8:21 PM

Wow, what a weekend! Suddenly SMW is all alone in first place in the league (only the final 7 league games count so SMW is 4-0 in league) with SME, ON and OE all tied for second. If the Vikes can survive the hard charging Lawrence Lions this week, it sets up the SME-SMW game in week 8 as perhaps the game of the year. If West can win out, they'll be legue champs and on an 8 game win streak, you'd have to think that would make them the #1 seed. That said, they HAVE to get off to a better start and not wait til the 4th Q to start playing against Lawrence. Also need to not give the Lions free gifts like OE did. And what about SMNW? Can they sneak up on the Eagles this week and possibly claim a #3 seed? Probably not but they're playing SO much better than when I saw them in week 2!