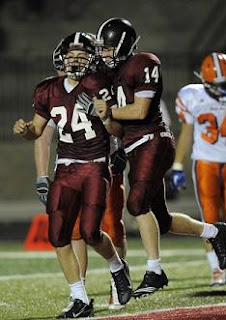 Three Up
Lawrence
Props to the Chesty Lions (right) for forgetting about their dreadful 2009 season when they went 1-8. This year's team has a new attitude and they played a great game at home on Friday in upsetting Olathe East.
SM Northwest
The Cougars are back on track, or so it seems. Kenny Mings has emerged as one of the league's top playmakers and quarterback Stephen Mangelsdorf has done a great job distributing the ball.
SM East
The Lancers have beefed up their run game in recent weeks after previously relying heavily on the passing game. This will benefit the team come district and potentially playoff time.
Three Down
Olathe East
Olathe East had been on fire leading up to their game with Lawrence. The team's four lost fumbles proved too much to overcome in their loss.
Leavenworth
Leavenworth has been a hapless group this season, and their 76-point loss to Olathe North was awful, especially considering the 62-point beatdown they received the week before.
Olathe Northwest
The Raven's have improved quite a bit from last season to this one, but they still haven't proven that they have what it takes to be considered a legitimate threat amongst the Olathes.
Individual Highlights 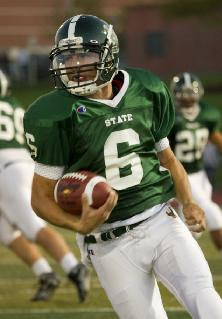 **SM East's John Schrock became the first quarterback to surpass the 1,000 yard passing mark, throwing for 180 yards which puts him at 1,062 yards for the season.
**Free State's Dylan Perry (right) had another game which filled the box score, rushing for 176 yards and two touchdowns and passing for 101 yards.
**Lawrence High's quarterback Brad Strauss threw for three touchdowns, giving him eight passing touchdowns this season, good for tops in the Sunflower League.
Week Six Power Rankings
1. Olathe East (4-1): My initial inclination was to drop the Hawks a spot, but I didn't see how Olathe North should jump Olathe East when just two weeks ago the Hawks shutout the Eagles.
2. Olathe North (4-1): The Eagle's 76 points marked the highest scoring output by any Sunflower League team this season.
3. SM West (4-1): SM West is a different animal in the second half of games. They dropped 34 second-half points on SM North, and made fourth quarter comebacks the previous two weeks.
4. SM East (4-1): After another solid win on the road at Free State it's looking like SM East is fielding the best team the school has had in years.
5. Lawrence Free State (3-2): Free State's two losses have been very close and they could just as easily be 5-0 right now.
6. Olathe South (3-2): After a third consecutive win the Falcons are starting to look more and more like the team they were hyped to be in the preseason.
7. SM Northwest (2-3): The Cougars had a nice showing on Friday, easily taking care of business against SM South.
8. Lawrence (3-2): The Chesty Lions pulled the biggest upset of the season so far with their win over previously undefeated Olathe East.
9. Olathe Northwest (2-3): The Raven's just can't seem to get over the hurdle with their Olathe opponents.
10. SM South (1-4): The Raiders have been playing poorly lately and their 51-12 loss to SM Northwest was brutal.
11. SM North (0-5): SM North had a bad day giving up 41 points and scoring zero despite a fairly competitive first half.
12. Leavenworth (0-5): Giving up 138 points in two weeks is downright ugly.

So the league is forming into groups like it does every year. You have the top tier teams: OE, ON, SME, SMW, LFS. Next you have middle of the road teams; OS, SMNW, LAW. and lastly the bottom 4; ONW, SMS, SMN, LV. This happens every year.

It even happens in the NFL!

there is far more parity in the league this year compared to most years. past seasons a team like lawrence (by team like lawrence i mean middle of the road) never wouldve beaten an Olathe East who seemingly was the clear cut best team in the league. Now we have SME, Lawrence and Free State who have the talent to beat the top 2 teams. Makes for a very fun year and it looks like the league title might be split between 2-4 teams. Now that doesnt happen very often as one team will usually run the table. The most important game in terms of deciding the league champion will be SME v. SMW as long as both teams take care of business the next 2 weeks.

You are correct there is more parity this year then in years past but i am not sure if thats the case because there really are 4-5 strong teams or because there is no truly dominant team like the North teams of the past.