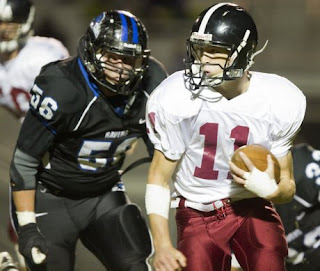 See the difference.....Eagles is and will be alway Sunflower League superior....

People seem to be missing that the OS-BVW game went into overtime after South freshman, Braden Smith, blocked a 20 something yard field goal which was kicked with 2.7 seconds left. It was insane.

Other than district 4 and 7, all districts are pretty clear. Note that district records is first factor in seeding so even teams that have clinched their district could wind up with a lower seed if they lose their last game.

District 1: SMNW has won the district, SMN-LV winner gets other playoff spots.

District 2 SME has won the district. SME-BVN winner gets other playoff spot.

District 7 WNW wins district with win or Campus win. Campus in playoffs with win and South loss. If North and NW win, comes down to points for second, Campus wins on points.

Correction District 8 Dodge and GARDEN (not Goddard) are in playoffs, winner wins district

olathe north sucks get ready to get beat in state

I guess they can't win it every year...but i can't think of any teams on this side of the state that are head and shoulders above them? SME, SMW, SMNW, SMN, OS, Freestate are not better (maybe equal). OEast beat North but lost to lawrence and have struggled in other games that should ahve been easier. I am not sure come playoff time if it will be quite that onesided.