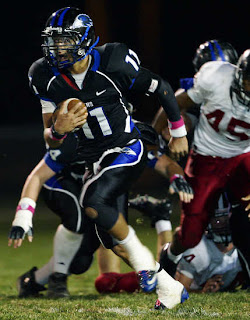 SM East
The Lancers broke a 15+ year losing streak to SM West, claimed a share of the Sunflower League title, and sealed a spot in the playoffs with their big win.
Olathe Northwest
Olathe Northwest (featuring Leonard Parks, right) finally eked out a close win over a quality opponent and in doing so kept their playoff hopes alive.
SM North
SM North took out the frustration of their 14-game losing streak on Wyandotte, coming away with a 42-0 victory and a shot at making the playoffs with a win this Friday.
Three Down
SM West
SM West's streak of consecutive wins against their rival SM East came to an end Friday; more pertinent is that SM West needs to beat a feisty Blue Valley North team on Friday to make the playoffs.
Lawrence
Lawrence came up a yard short of grabbing a late lead over Olathe Northwest and they have lost three straight games since their upset victory over Olathe East.
Lawrence Free State
Free State has played the most difficult schedule in the Sunflower League, but yet, they haven't managed to win any of their big games since their week one win over Olathe south.
Individual Highlights
**Olathe North's Tanner Gentry ran the ball twice for 75 yards and a touchdown, and caught two passes for 73 yards and a touchdown.
**Brandon Willingham led Olathe East with 19 carries for 193 yards and two touchdowns, and he threw a nine-yard touchdown pass.
**SM Northwest quarterback Stephen Mangelsdorf completed 16-of-21 passes for 183 yards and three touchdowns and he also rushed for a touchdown.
Week Nine Power Rankings
1.Olathe East (7-1): Olathe East got back on track against Blue Valley Northwest and now they face Olathe South for the district title.
2. Olathe North (7-1): The Eagles had no problems dispatching a solid Free State club and the team is peaking at the right time.
3. SM East (7-1): The Lancers are on cloud-nine right now and this may be the best season in Lancer football history.
4. SM West (6-2): The Vikings have gone from a six game win streak to a do-or-die district finale against Blue Valley North.
5. Olathe South (6-2): Olathe South now holds the league's longest winning streak at six games, and with a playoff spot in hand they have nothing to lose against top ranked Olathe East on Friday.

Olathe East is a more complete team. They have a great running game and a great defense. That is how teams win championships.

These ON fans are really getting on my nerves, all they do is complain and start fights on here and at the games they religiously booo their opponents. I'm going out on a limb and saying worst fans in the sunflower league?

The worst fans as well as most disrespectful players.

Apparently, I am not alone and still think that the Eagles is the only top ranked in the Sunflower league not the Hawks! However that
profanity from above is not acceptable....

"Olathe East is more complete team.." from the anonymous above^^

I don't think it's fair to base opinion on one or two semi-literate fans who post on this website. In fact, although I agree with Eli's rankings, I've found the O East fans to be by far the most obnoxious in the league at games. North fans a little full of themselves maybe but usually respectful at least against SM teams. North PA Announcer: THE premier football program in the state of Kansas. Really? I think Hutchinson might disagree. But the East fans often chant obnoxious chants about the opposing fans and even the other team's band (c'mon guys, the band, really?). I was very impressed with the SME fans this year, very enthusiastic and respectful, also SMNW brought a huge crowd to the game. So often at SMW games our fans outnumber the opponents even at road games so good job, coug fans. Also impressed at last years LV game, fans very supportive of their team in spite of the score.

Semi literate? You're much too kind...

Maybe a reflection of the education received in Olathe..

suck my nuts olathe teams bunch of trash. smw till i diiiiiiie... titties!!!

Wow! Another uneducated comment left....clearly it has nothing to do with "a reflection of the education received in Olathe.." but obviously it was wrote by either SM or Hawks kids for instance from this "8 Time State Champison" are the perfect sample of Shawnee Mission students claim that they actually graduated from Olathe North....

So, nice try to pin on these true Eagles fan and of course, the Eagles own the Sunflower League!

-Hawks hater and you all too from SM...get a life.

Just wondering but is there a reason Leavanworth is over SMN? SMN completely dominated Wyandotte and only allowed 51 yards of total offense.

He doesn't care about how accurate the 11th and 12th spot are??? What a surprise.

Please refrain from profanity and observe professionalism when posting comments. Thank you!

Olathe North fans are the Nebraska fans of the Sunflower League. They feel an entilement of this league form thier past success. When another team shows any kind of challange they refuse to acknowlege that teams accomplishment and state their team is down that year. By far the rudest fans in the league are Olathe North. The wildest and push the limit on what is over the line is SM East. The largest goup to show up for games away or home is SM Northwest they just keep getting handcuff form admiistration on what they can cheer.
All in all it is just fun rivalries.

Olathe Northwest represents all that is wrong with capitalism. It's Hitler's dream over there. Soccer moms kick and scream; "Don't make Joey go to school with those kids!

WOW...I am not sure why "Anonymous" would say anything about Olathe Northwest. I have never heard anything negative about their fans or players. Not like the North players who have a bad reputation. Talk about being RUDE and having bad sportsmanship - I have read and seen it all from Olathe North the last few weeks. Come on!!! Last time I checked...there were no soccer players on the football field. Oh wait, LFS has one and she is 5'1" and can kick some ASS! Hope she kicks yours!!!!

Regardless of what biased fans think about Olathe North or Olathe East ( I do not, nor did I attend either school) the fact is that OE beat ON. Therefore, THEY ARE the superior team in the conference until a team with one or fewer losses beats them. I understand that "fandum" may slip into your sub-conscious, but please, try to spare the rest of us from your flawed arguments.

^^ Wonder how can the Olathe East be a superior in the sunflower even they never play SMW nor SME and the Olathe North beat them...that is superior enough, you just mad because they beat both SMW and SME.

Beating both most losing teams Blue Valley does not earn enought for the East.