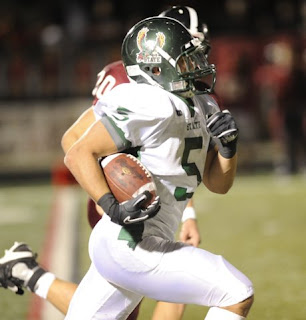 Lawerence Free State 42, Lawrence 20
This matchup definitely lived up to the hype in the first half--but the second belonged to the Firebirds from Free State. Lawrence was able to match Free State's two first half touchdowns with two of their own from running back Charles Jackson. The game was tied 14 all at halftime. The Firebirds were able to blow the game open with 28 straight points in the second half. The scores included a 5-yard touchown run from Dylan Perry, which was set up by a 76-yard run from Preston Schenck (right), as well as a fumble return for a touchdown by Henry Vaeono. Schenck also ran a fumble back for a touchdown, this time in the fourth quarter, ultimately finishing the game off. Lawrence Free State has now won five straight games in the series.
Olathe East 35, Olathe South 14
Early on this game had the makings of a good one. Brandon Willingham put Olathe East on the board in first quarter with a 20-yard touchdown run to give the Hawks a 7-0 advantage. Olathe South matched that when Nick Sands put the final touches on a drive with a five-yard touchdown run in the second quarter. Olathe East was able to drive and score another touchdown on a one-yard run from Willingham, and the Hawks took a 14-7 lead to halftime. The real game changer proved to be Olathe East's Austin Fulson. Early in the third quarter Fulson scooped up an Olathe South fumble and ran it back 26 yards for a touchdown. On Olathe East's next possession Fulson took a handoff 55 yards for another touchdown, to give Olathe East a 28-7 lead. Olathe South quarterback Frankie Seurer took a keeper 13 yards for a touchdown later in the third quarter to pull the Falcons within 14, but they weren't able to get any closer. Willingham added a five-yard touchdown run in the fourth quarter to seal the deal.
Olathe North 35, Olathe Northwest 6
Olathe North used a swarming defensive effort to manhandle Olathe Northwest in the final game of the season. The Eagles got on the board first when Victor Simmons scored on a 17-yard touchdown run. They added another touchdown in the second quarter when Adonis Saunders completed a long drive with a one-yard touchdown run. Saunders, along with Dominick Wilson and Trey Geiger recorded interceptions during the game, and Connor Mashek blocked an Olathe Northwest punt in the fourth quarter which led to an easy one-yard touchdown run from Wilson.
SM Northwest 41, Wyandotte 14
A big first quarter was all it took for SM Northwest to ensure a victory. Antoine Smith first scored on a thee-yard touchdown run. Next, James Gregory added a 42-yard score. Smith chipped in a nine-yard touchdown run, and AJ Spencer returned a punt 67 yards for a touchdown to give SM Northwest a 28-0 lead at the end of the first quarter. SM Northwest's starters played sparingly throughout the rest of the game, with Gregory adding a one-yard touchdown run, and senior KC Waterman scoring on a two-yard run in the third quarter.
SM North 28, Leavenworth 24
Despite these teams only having a combined two wins on the season, the game turned out to be a thriller. Leavenworth opened the game with two touchdowns in the first quarter. The first came on a 14-yard from Anthony Powell, and the second on a eight-yard pass from Judson Cole to Alec Zeck. SM North then responded with three unanswered touchdowns in the third quarter. Kendall Kelly scored on a 10-yard run, Mitch Paden added a one-yard touchdown run, and Kelly added another 18-yard running score before the half. In the third quarter Leavenworth tied the game, 21 all, on a 25-yard touchdown run from Powell. The Pioneers reclaimed the lead in the fourth quarter on a 26-yard field goal from Cole. Trailing 24-21, Kelly broke loose on perhaps the biggest play of the season for the Indians. Kelly took a carry 69-yards for a touchdown to put SM North up 28-24, which turned out being the final score.
SM West 34, Blue Valley North 10
It was a scary start for the Vikings. Blue Valley North successfully pulled off a flee-flicker on their opening possession that resulted in a 35-yard touchdown pass from Danny Dolen to Michael Widgrig to give the Mustangs a 7-0 advantage. SM West answered the score with a 51-yard touchdown run from Will Livingston on their next possession. The Vikings added two Mark Whitrock field goals as well as a five-yard touchdown run from Cordi Pascal to head to halftime up 20-10. In the third quarter Armani Williams found DeAndre Graves on a 24-yard touchdown pass to basically ice the game. A one-yard touchdown run from Danny Dowling in the fourth quarter gave the Vikings the 34-10 edge. With the victory, SM West qualified for the 6A state playoffs and closed out the regular season with a record of 7-2. It's the seventh year in a row that SM West has had a winning regular season record.
SM East 28, SM South 12
Since no official box score was reported for this game there is no official script of the scoring that took place in the game. What we do know--SM East claimed a share of the Sunflower League title, won their district, and set the record for wins in school history with eight. The Lancers play Olathe South next week in the Regional Round of the playoffs. For SM South, the team would have liked to at least match last season's three game win total, but overall the Raiders did have their bright spots on the season.

Excited for playoffs! All Sunflower League, piss off Blue Valley schools. i know, i know, the top notch BV football program this year plays in 5A. Good luck to them. Now, will it be a SM or Olathe school that makes it w the right to play an undeafeted western KS district school? And of course LFS will have something to say about that-they played OE and SMW tough this year. My take, after watching 12 different SL games......the shermanator at SMEast. That team buys in, plays tough, strong defense and is potent on offense~maybe more so now-good sr leadership, we'll see. Callaghan cannot be counted out-he has weapons and the know how to get it done. as you can tell, it will be an exciting regionals!

I expect the "Big Four" to survive the first round (SMW, SME, ON, OE). From there I think anything can happen. SMW and ON would host the second round games which might be a big advantage. SME will be looking for revenge against ON in a game they feel they were robbed of earlier this yers. SMW-OE always a heated rivalry with considerable ill will between those two teams, who took turns ending each other's seasons in '04-'07. The '09 game was also a barn burner with OE blowing a 14-0 lead and losing 17-14.

Why would SMW have homefield advantage in 2nd round? If OE wins they are the higher seed... You are right on, Impaler..there will be some historic games.

Home field is complicated in Kansas. First it is decided by who has the most home fields in previous rounds so since technically, SMW is playing a ROAD game in the first round (albeit in their home stadium against SMNW) and O East has a HOME game, West would get the home game in round 2. I know, I know, it makes no sense, higher seed should always have home but that's not how it works. SM West would then get home against Olathe North in the third round too, but if they played SME in the third round, it would go to a geographical tie break where the team further (East? West? not sure what it is this year) would get the home game.