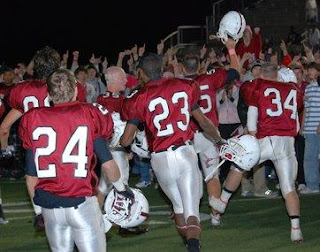 SM East
Most wins in school history? Check. District Championship? Check. A claim of the Sunflower League crown? Check. Now we'll see how much the Lancers can accomplish in post-season play.
SM North
The Indians (right) were able to pull ahead and claim a playoff berth after trailing Leavenworth in the fourth quarter--the win marked the Indians' second in a row.
Olathe North
The Eagles beat their district opponents by a combined score of 114-16; clearly Olathe North is playing equally well on both sides of the ball.
Three Down

SM South
The Raiders played one of if not the easiest schedules in the Sunflower League and still only managed to come away with two wins.
Olathe Northwest
With their loss to Olathe North the Ravens' all-time record against Olathe opponents dropped to 1-20, and unfortunately for Olathe Northwest, the Olathe standard is what they are held to.
Lawrence
After their big upset win over Olathe East in week five the Chesty Lions went on to finish the season with four straight losses.
Individual Highlights
**SM North's Kendall Kelly took an inside reverse 69 yards for a touchdown to give SM North a fourth quarter lead over Leavenworth, and ensure the school of it's first playoff trip in seven years.
**Lawrence Free State's quarterback Dylan Perry had an amazing game on the ground rushing for 187 yards and four touchdowns. The 187 yards put him over the century mark for the season.
Final Regular Season Power Rankings
1. Olathe East (8-1): The Hawks did an excellent job of shutting down Olathe South, and in the process ended the Falcons' six game winning steak and claimed a share of the Sunflower League title.
2. Olathe North (8-1): The Eagles captured a share of the Sunflower League crown with their blowout victory Friday night, and looked impeccable on the defensive side of the ball.
3. SM East (8-1): John Schrock's absence will be felt, but Robby Moriarity showed that he is plenty capable of managing the position. The Lancers also claimed a share of the Sunflower League title by winning on Friday.
4. SM West (7-2): Early on it looked like yet another Blue Valley school would trip up the Vikes, but they put that scare to rest and physically beat up on Blue Valley North.
5. Olathe South (6-3): The Falcons' six game winning streak is over; now would be a good time to start another winning streak.
6. Lawrence Free State (5-4): The Firebirds' second half fireworks on both sides of the ball proved too much for their cross town rival.
7. SM Northwest (5-4): SM Northwest rolled through the easiest 6A district in the state--we'll see how much they've actually improved this Friday.
8. Olathe Northwest (3-6): Perhaps next season will be Olathe Northwest's chance to shed the title of "little brother" amongst the Olathes.
9. Lawrence (3-6): Lawrence played well Friday considering the amount of injuries they've encountered and the relative youth of their roster.
10. SM South (2-7): The Raiders were a better team than their two wins showed, but their 0-3 district record ended the season on a sour note.
11. SM North (2-7): SM North won two games, lost 14, and has now won two more games ... win number three won't be easy against Olathe North.
12. Leavenworth (1-8): The Pioneers were a score away from beating SM North and claiming a playoff spot; the team showed alot more heart late in the season.
Photos courtesy the Shawnee-Dispatch
Posted by Eli Underwood at 6:20 PM

Hahaha!!!! No, clearly the Eagles is #1 in Sunflower league!

Still mad over that stupid game that the Viking lost to their 1st game?

Still can't get the point of the fact that the Hawks did not play neither SMW nor SME??? And yet, playing to 2 most losing teams from blue Valley???

If your going to comment at least use proper grammar.

Wait, I'm confused, Hawks hater...? That would mean he hates Olathe East, which he has as number one, right? You must mean Eagles hater.

Calling all SL fans!~ whats your pick for the playoffs?

I would guess Will has the best 40 time but I'd still like to see Cordi get more carries. He's got a little more bulk and seems to bull his way through smaller holes better.