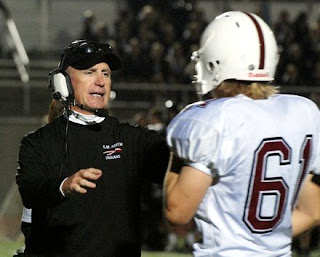 Week Nine Matchups
All games times 7 p.m. unless otherwise noted
Leavenworth (1-7) at SM North (1-7)
Last season the "Toilet Bowl" featured two 0-8 clubs, Leavenworth and Lawrence, squaring off in a week nine battle for supremacy of the cellar. It's ironic that this season the two teams with the worst records in the Sunflower League would be playing eachother in week nine once again. Fortunately both teams were able to collect wins against Wyandotte, so neither team will go out winless. The crazy thing it that due to the wacky district playoff qualifications, the winner of the game will make the playoffs. SM North head coach Dennis Grayless (above) could really make folks forget about the team's 0-7 start if he could will the team to a victory.
SM South (2-7) at SM East (7-1)
Senior Robby Moriarty will be making his first start at quarterback for SM East this season following the injury to starter John Schrock in last week's game. Don't expect much of a drop off though. Moriarty passed for 765 yards last season and was SM East's starter for much of the year. The Lancers need to watch out for a letdown as well. Last week's big win over SM West was huge for the program, but a loss to SM South would be equally disappointing.
Wyandotte (2-6) at SM Northwest (4-4)
SM Northwest had their way with SM North and Leavenworth, and this one should be no different at their home stadium. The Cougars can match last season's win total of five games with a win in this game, but more importantly the team is in the playoffs and this game will be a great opportunity for a tune-up before the playoffs begin.
Lawrence Free State (4-4) at Lawrence (3-5)
Despite the presumed disparity between these two programs we find them battling it out in week nine with similar records. Free State who is 1-1 in district play can seal a playoff berth with a win by any margin. Lawrence, 0-2 in district play, can claim a playoff spot if Olathe North beats Olathe Northwest, and they manage to beat Free State. This game is always a heated contest, but this year's playoff implications should add a whole new meaning.

SM West (6-2) at Blue Valley North (3-5)
The last thing SM West wants to become is a poster child for why the KSHSAA should reformat the way they determine playoff qualifiers, but with a loss the Vikings would become just that. SM West will be entering an unfamiliar venue against an unfamiliar team, and those elements have not treated the Vikings well in the past. The team has gone 0-3 since 2007 against Blue Valley opponents, with two of those losses coming in the playoffs. Right now, SM West is focused on just making the playoffs.
Olathe Northwest (3-5) at Olathe North (7-1)
Since Olathe Northwest's inception in 2004 they have a grand total of one win in 20 games against Olathe opponents. While the Ravens have shown flashed of brilliance in 2010, they haven't really ever been in consideration as one of the top six teams in the league. Olathe Northwest could shed quite a bit of frustration with a win against Olathe North, but it certainly won't be easy. The Eagles have been on a roll lately and looked primed for a long playoff run.
Game of the Week
Olathe South (6-2) at Olathe East (7-1)
These two programs have squared off in some pretty heated battles over the last decade. The game that first comes to mind was the 2005 regular season finale between these two. Both teams were 8-0 heading into the game, and there was a great cast of athletes in competition including Olathe South's Brady Croucher, Devin Cummings, and Tony Bryant and Olathe East's Derek Miller, Adam Parks, and Dee Bell. Olathe East jumped out to an early lead on a long Bell touchdown run an never looked back. Despite the Hawk's lead throughout the game it remained a heated contest and neither team let down. This year's game doesn't feature quite the stables of talent, but the matchup of running backs should be fun to watch. The Hawks' Brandon Willingham and Austin Fulson lead what may be the top duo in the Sunflower League, while the Falcons' Nick Sands and Jake Crist have been headliners all season in the running game as well. Both teams have qualified for the playoffs so the game will be for bragging rights more than anything.
Photo courtesy the Shawnee-Dispatch
Posted by Eli Underwood at 8:40 PM

Lost 2 games on the Olathe News last week....going for two point conversion in first overtime? Jeez!. Still two games up on them for the year though. Two 'win and get in' games this week, and an Olathe showdown for the District 3 championship.

SMW (6-2) @ BVN (3-5) Vikes continually shot themselves in the foot with turnovers, dropped balls and penalties (some of which they actually committed) last week. Must play better to beat the Mustangs this week. I'll very hesitantly go with West to get it back together this week and claim a playoff spot...SMW 27 BVN 21

SMS (2-6) @ SME (7-1) Lancers are already District 2 champs but need to win this to get into the conversation on top seeds. A loss here will almost certainly drop East to the 4 seed. No Schrock will definitely be a downer since East has very little running game, and without Schrock's pinpoint passing they would have struggled to beat even an inept Viking team last week. Raiders at their best are not the Vikings at their worst, however....SME 27 SMS 12

WYAN (2-6) @ SMNW (4-4) Not even close. Cougs win and get to rest starters in second half. This is the kind of game where you just hope no one gets injured. Cougs should be the 4 seed if neither SME or ON lose. SMNW 66 WYAN 0

ONW (3-5) @ ON (7-1) This district is almost certainly going to advance ON and LFS but anything is still Possible. Curiously, ONW needs LAW to win to get in but LAW needs ONW to lose for the Lions to make it. Neither controls their own destiny. Regardless, the Ravens can't match up with the Eagles who seem to be peaking at the right time....ON 38 ONW 17

LFS (4-4) @ LAW (3-5) Free State in playoffs with win, Lions can still make it if they win by more than 7 AND O North also wins. Lions get some players back this week, not sure if that includes Buffalomeat or not. Firebirds have been awful on the road this year but this 'road' game is at least in town. I think Free State has too much talent for the Lions....LFS 27 LAW 20

I won't bother with the meaningless non-SL game between BVW and BVNW, who cares?

Adam lowe has done a great job rushing the football this year when given the chance for SM east. He's averaging about 9 and a half yards per carry. When he's given the chance to run the ball he does a good job along with Moriarty, SME will be just fine this season

I agree Moriarty is a very serviceable backup but Schrock is something special. There were probably 5 or 6 passes that I thought were sure picks when they left Schrock's hand last week, but they just got past the West defenders fingertips and into his receiver's hands. I only saw Lowe against West and Denzell Simpson and the Vikes shut him down pretty good. I'm sure they have enough to get by South and if they get lucky and get a first round game against SMN, Schrock should be back for playoff game 2 as I understand it. If they get unlucky and have their first playoff game against OS/OE loser without Schrock, though, I think they're in big trouble.

Schrock was something special however what people forget about is Moriarty had more passing yards and passing touchdowns last year then schrock. Lowe had 7 carries for 74 yards against west so I really don't think thats too bad, averaging above 10 yards a carry isn't bad

No prediction for Olathe South at Olathe East, TheImpaler?

Heh, oh, sorry forgot the big O showdown in my picks...Both teams struggled with BVW, Interesting matchup with South's free wheeling offense and East's league leading D. Still I think East has the playmakers and look for them to win a tight one...OE 28 OS 24

I hope you're right, really, Clayton best of luck..as a good Viking fan, my favorite teams are always SMW and whoever is playing Olathe East. This week, I'd particularly love to see the Falcons win...it leaves West with a 50/50 shot to play SMNW in the first round and I'd LOVE to see an ON-OE matchup in the first round...so by all means go out and beat the Hawks! SMW in the playoffs btw, SMW 34 BVN 10.

Eli - great forum and I've really enjoyed your insight, detailed stats, and writeups about our favorite league over the past couple of years. Thanks!

Thanks, it should be one hell of a game.

If the Firebirds don't beat the Lions by at least 2 touchdowns tonight, there is a problem.