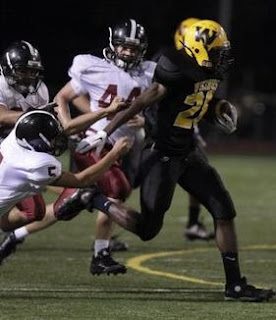 SM West
The Vikings (featuring running back Cordi Pascal, right) still have a little catching up to do on the defensive side of the ball, but the offense was once again stellar scoring 55 points in the team's rout of Lawrence.
Olathe South
The Falcon's have quietly won four straight games after starting the season 0-2. The team could raise some eyebrows in district play.
SM South
The Raiders broke their losing streak with a good showing against Leavenworth. Granted, everyone seems to do well against the Pioneers, but it was a step in the right direction.
Three Down
Lawrence Free State
The Firebird's offense was completely shut down on Friday at Olathe East. Free State is notorious for getting stronger as the season goes on, but they have now lost two straight games.
Olathe Northwest
It was yet another solid effort that resulted in a loss for the Ravens. Olathe Northwest just doesn't seem to have that extra bit of strength to claim any of these close games.
Lawrence
The Chesty Lions weren't able to carry over the dramatics from their week five victory. Perhaps the most disheartening thing about the team's 34-point loss was the injuries; the team had already lost four starters to injury, and they can probably now make that five with receiver Aaron Gile's broken wrist.
Individual Highlights
**SM West's Jordan Chapman caught two lengthy touchdown passes, one of which went for 66 yards, and the other 50 yards.
**Adonis Saunders had a career game for Olathe North, carrying the ball 23 times for 252 and three touchdowns.
**SM Northwest's Stephen Mangelsdorf completed 13 of 24 passes for 200 yards and two touchdowns in nearly leading his team to a comeback victory.
Week Seven Power Rankings
1. Olathe East (5-1): Olathe East's defense showed why it ranks as tops in the league by forcing a goose egg on Friday night.
2. Olathe North (5-1): The Eagles haven't been playing with the same intensity and focus since their week three loss; we'll see if they buck that trend in district play.
3. SM West (5-1): The Vikings play their second consecutive Thursday night game this week which will give them an extra prep day for rival SM East in week eight.
4. SM East (5-1): The Lancers are finding ways to win close games, something they hadn't been able to do well in past years.
5. Olathe South (4-2): The Falcon's get to host Blue Valley district opponents for the next two weeks before taking on Olathe East.
6. Lawrence Free State (3-3): When the regular season is all said and done, Free State will have probably played the most difficult schedule of any team in the league.
7. SM Northwest (2-4): The Cougs showed alot of heart in their two point loss against Olathe North; now comes a three week cakewalk into the playoffs.
8. Lawrence (3-3): It's hard to say whether or not Lawrence will be able to overcome the injury bug that has ransacked its roster.

9. Olathe Northwest (2-4): The Ravens now roll into what could probably be considered the most difficult 6A East district consisting of Lawrence, Free State, and Olathe North.
10. SM South (2-4): The season can be viewed as a success if the Raiders can win another game and match last season's win total.
11. SM North (0-6): SM North's losing streak will probably get a bit worse before it gets snapped.
12. Leavenworth (0-6): The Pioneers are facing the most pedestrian opponent they have faced in the last two and a half years in Wyandotte--the losing streak could finally end!

Photo courtesy the Lawrence Journal World
Posted by Eli Underwood at 10:56 AM

Why is shawnee mission south always so terrible?

Just to answer my own question, if anyone else is interested, if SMW, OE and ON all finish 8-1 the 1,2 and 3 seeds will be drawn from a hat. Head to head results will not come into play because SMW and OE do not play. Points are also not factored in. Similarly the selection would be random in the event of a three way tie between SME, OE and ON at 8-1. If anyone wants the full rules, let me know and I will post them.

To answer the question, I believe the coin toss rule literally comes into play in that scenario.

Eli, I assume you're going to post stats this week. I'm curious to see Armani's line from the Lawrence game...several of us were debating in the stands how many yards he had at half time.