SM East 18, Olathe Northwest 13
Thursday night's game was much closer than #4 ranked SM East would have liked. The Lancers opened scoring with a four-yard run from Seth Hartman in the first quarter. In the second quarter Olathe Northwest's Nick Bandy scored on a 13-yard pass from Leonard Parks and the Raven's gained a 7-6 lead at the half. The lead carried all the way to the fourth quarter when SM East got on the board again with a one-yard run from John Schrock. Schrock then added another three-yard run to push the lead to 18-6. Olathe Northwest's Connor Middleton ran a touchdown in from two yards out to pull his team within five, but the Raven's weren't able to score again.
SM West 55, Lawrence 21
After several weeks of doing the majority of their scoring in the second half, SM West finally completed the task early. The Vikings scored 38 first half points, effectively putting away Lawrence. Quarterback Armani Williams opened the scoring with a 66-yard touchdown pass to Jordan Chapman. Moments later Lawrence's Brad Strauss took a keeper 72 yards to even the score at 7. The Vikings responded with a five-yard touchdown run from Tre Burt and a 43-yard field goal from Mark Whitrock. On the Vikings next possession Williams threw an errant pass that was intercepted by Lawrence's Demonta Clark and returned 46 yards for a touchdown. SM West finally gained control by scoring three touchdowns to end the half--a 90-yard kick return by Cordi Pascal, followed by a 50-yard pass from Williams to Chapman, and a 3-yard run by Pascal. 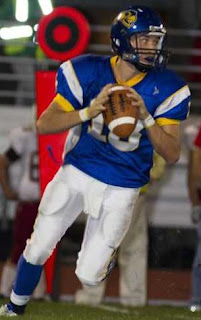 Olathe South 42, SM North 6
Olathe South notched their fourth win in a row while SM North lost their sixth straight of the season. A nine-yard touchdown pass from Frankie Seurer (right) to Kendal Harland put Olathe South on the board late in the first quarter. The Falcons added another score when Jake Crist broke loose for a 49-yard touchdown run. Crist then caught touchdown passes from Seurer on consecutive possessions to push the lead to 28-0. A 32-yard run the in second quarter by Nick Sands put Olathe South up 35-0 at the half.
Olathe East 17, Lawrence Free State 0
The key question surrounding this game was whose style was going to dominate--Olathe East's physical, defensive game, or Free State's highlight thrills? Olathe East appeared to have won that battle. The Hawks recorded eight sacks and held Free State to 111 yards of total defense in their shutout victory. Brandon Willingham scored the Hawks lone first half touchdown on a run from three yards out late in the second quarter. Leading 7-0, the Willingham added another touchdown early in the fourth quarter for Olathe East to push the lead to 14-0. A field goal gave the Hawks their 17 point cushion on the victory.
Olathe North 31, SM Northwest 29
Adonis Saunders scored Olathe North's first touchdown on an 80-yard run in the first quarter setting the tone for the first half. The Eagles racked up two more touchdowns and a field goal to lead SM Northwest 24-10 at halftime. It looked like Olathe North would cruise until SM Northwest came out firing in the third quarter. Stephen Mangelsdorf scored on a run from four yards out to move the score to 24-17. Later in the third he completed a 14-yard touchdown pass to James Gregory, but the Cougars couldn't convert the extra point and trailed 24-23. Saunders broke a 67-yard touchdown run in the fourth quarter to push Olathe North ahead by eight. SM Northwest was able to muster up one more touchdown, this time a 39-yard pass from Mangelsdorf to Kenny Mings. The all-important two point conversion failed with just over nine minutes left in the fourth. From then on the game was a stalemate, and Olathe North was able to escape with the victory.
SM South 36, Leavenworth 20
Two teams who had lacked offensive firepower in recent weeks were finally able to produce, with SM South claiming the 16-point victory. Gabe Guild added rushing touchdowns of 20, 12, and three yards during the game for the Raiders, 2-4. Leavenworth's Judson Cole scored touchdowns on runs of one and 83 yards to put the Pioneers within eight points, down 22-14 in the third quarter. Leavenworth was never able to even the score however, losing their sixth game of the season.

Got to see Bryce Atagi, James Franklin and Cameron Torneden play football on Saturday! Like Sunflower League Old Home week. Franklin the biggest contributor but Atagi's Ichabods got the game.