Willingham holds claim to the top spot after another excellent week of production. The senior was a workhorse carrying the ball 30 times and scoring two touchdowns. Both scores were essential in Olathe East's 17-0 victory.
2. Adonis Saunders, Running Back, Olathe North
Week Six: 23 carries, 253 yards, 3 TDs
Saunders had the best game of his career on Friday. The 253 yards rushing were a personal best for Saunders, and it was an effort reminiscent of North's career rushing leader James Franklin from last season. Saunders' average yards per carry sits at 10.3 on the season, a number practically unheard of at any level of competition. 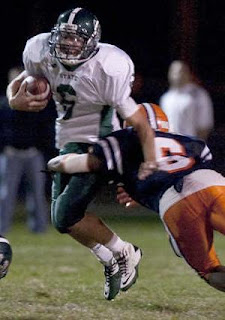 3.Dylan Perry, Quarterback, Lawrence Free State
Week Six: 8-of-20 passing, 87 yards; 18 carries, 12 yards
Contrary to Saunders career highs, Perry (right) may have played to career low levels. He was never able to get anything going on the ground and that lack of success carried through to the passing game. Perry must play well for Free State to have success in districts.
4. John Schrock, Quarterback, SM East
Week Six: 15-of-26 passing, 179 yards; 2 rushing TDs
Schrock, despite his gaudy passing numbers, continues to score touchdowns on the ground. This past week he scored two more rushing touchdowns to lift SM East to victory. His aerial assualt is what gets the team in position for the short scores.
5. Stephen Mangelsdorf, Quarterback, SM Northwest
Week Six: 13-of-24 passing, 200 yards, 2 TDs

Mangelsdorf makes his debut on the list after nearly leading SM Northwest to an upset victory over Olathe North. Mangelsdorf's numbers should only continue to get better as he leads his team through what should be a 3-0 district run. 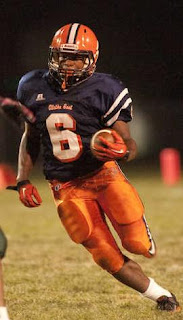 Regarding #4 on your First and Ten, don't overlook Olathe South's kicker who has only missed 1 PAT and 1 Field goal this year....