SM West (5-1) at SM South (2-4) (Thursday night game)
SM West begins its quest for a third consecutive district championship with a Thursday matchup against SM South. The Viking's offense has been rolling this season and its hard to imagine SM South being able to contain the attack. SM South is coming off a 36-20 victory last week, but the Raiders two wins have come against teams that are a combined 0-12. 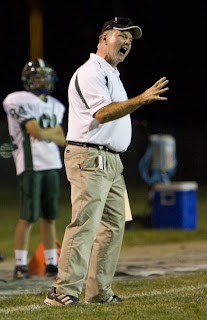 Olathe Northwest (2-4) at Lawrence Free State (3-3)
Both of these teams started the season on high notes, and both have struggled of late. Olathe Northwest has lost three straight games, two of which were be a touchdown or less. Meanwhile Free State has probably played the toughest Sunflower League schedule thus far, and lost two straight games. Free State's head coach Bob Lisher (right) couldn't have been happy with his team's mere 111 yards of total offense last week, and you can bet they'll come out firing.

Olathe North (5-1) at Lawrence (3-3)
Will Lawrence High once again show off their home field magic? The Chesty Lions are 3-0 at home this season, include their week five upset of top ranked Olathe East. This game marks the third straight week in which Olathe North has had to go on the road. The Eagles narrowly escaped SM Northwest last week and the team could use a solid victory to get totally back on track.

SM Northwest (2-4) at SM North (0-6)
This year's Hula Bowl probably won't be as close as the two team's records would indicate. SM Northwest is likely the best 2-4 team in the state of Kansas, and this game marks the first of any easy district slate. SM North, who is still searching for a win under new head coach Dennis Grayless, could almost guarantee themselves a playoff berth if they could pull the big upset here.

Olathe East (5-1) at Blue Valley West (1-5)
Olathe East's first district game comes against a surprisingly bad Blue Valley West team. The Jaguars were well thought of in some preseason rankings, but have cleary not lived up to the hype, which is shocking considering their talent. Blue Valley West is led by its top two playmakers, Darion Lindsey and DeSean Warren, as well as Kansas offensive line commit Dylan Admire. But, Olathe East has more talent overall, and should win this game.

Wyandotte (2-4) at Leavenworth (0-6)
While Wyandotte has the better record, Leavenworth has as much talent and has played a much more difficult schedule. It would be great to see the Pioneers snag a victory, given the fact that they haven't had one in over two years. And who knows, if Leavenworth does win they could beat SM North and make the playoffs.

Blue Valley North (2-4) at SM East (5-1)
This matchup is always good when it involves country club sports, but for once it has decent football implications. Blue Valley North has struggled offensively all season but they finally had a good showing last week when they beat Blue Valley Southwest 38-21. SM East has had no offense problems all season, but this is the first game that truly has pressure implications for the team. We'll see how they perform.

Blue Valley Northwest (1-5) at Olathe South (4-2)
Olathe South is the heavy favorite to win its fifth straight game, which is pretty impressive given the fact they began the season 0-2. Blue Valley Northwest has been in a rebuilding mode this season but they always tend to turn it up a notch late in the season. The Falcon's can't get caught sleeping or their winning streak will end.

It's District time, baby...the games count for real now! I'll save my annual diatribe against this horrible district system for another post though. Firebirds let me down last week, but I'm still three games up on the guy who picks for the Olathe News for the year. Hopefully the Pioneers will pick up another game for me this week:

SMS (2-4) @ SMW (5-1) Vikes can clinch a share of the conference championship with a win over the hapless Raiders. Viking's league leading offense clicking on all cylinders now, it's difficult to pick an upper number against the non-existent Raider defense. Only Coach Callaghan's aversion to running up the score will limit this one, but Vikings are so deep even their reserves may run wild against SMS...SMW 63 SMS 13

BVN (2-4) @ SME (5-1) Lancers survived a predictable let down last week, back home to SMS stadium this week against a BVN team that may not be as bad as their record suggests (ranked 5th worst 6A team in Prep Power Index? I don't think so) but still will not be able to match up with either East or West. Lancers win here and set up the showdown for the conference championship against Vikes next week...SME 27 BVN 13

ON (5-1) @ LAW (3-3) Eagles have not been sharp lately, I'd like to think the Lions could make a game of this at home but without Buffalomeat and a host of other injuries, and with a defense that was simply gashed by SMW last week, It's not going to happen....ON 42 LAW 20

ONW (2-4) @ LFS (3-3) Firebirds must get back on track here. After two lackluster performances and against a pretty good Raven defense this game has trouble written all over it. Still, at home, and against a badly bruised up ONW team I think the Firebirds regain some of their former flash...LFS 24 ONW 17

OE (5-1) @ BVW (2-4) A classic trap game for the Hawks. OE clearly has the best defense in the League and the Jags have a potent offense but no defense. This is the classic unstoppable force v. immovable object matchup here. In the end the I think the Hawks are able to score enough points to stay on track...OE 31 BVW 21

BVNW (1-5) @ OS (4-2) One last tuneup game for the Falcons to get better before facing some tougher challenges. The Huskies actually do look to be one of the worst 6A teams in the state and the Falcons roll here...OS 41 BVNW 10

"Only Coach Callaghan's aversion to running up the score will limit this one..." Im sorry but Im going to call you out on this one.

whooooooaaahhhh nelly... could this game get any bigger?

Callaghan often puts in sophomores with (comparitively) small leads in second half of games, if you check the box score, 14 of the points came off a pick six and backup QB JP Jones' run...it's not our fault if North can't even stop the backups. Coach C up 35-0 at half last year vs. LV played all sophs the entire second half. He REALLY does take it easy on bad teams...The Lawrence game could have been 76-21 easily if he's wanted to run it up.

Good news on the HVHSGOW though...been a long long time. They had West on three times one year (2006?) and haven't shown crap for Sunflower games since. Belden basically told me after three times in one season it would be a while before we're on again. But c'mon, who want to watch Harmon play Schlagle really?

I wouldnt worry about me becoming a Donkey fan. Ive got an arrowhead on my arm for life... But the last East game left a bad taste in my mouth so I decided to stay for one more game. That and the KU game tonight... GO EAST! BEAT BVN!

Eli - a question. Looking at high school sports.com, this year's freshman team is undefeated with mostly huge lopsided wins except it lists a 38-0 loss to ONW. Surely this score is backwards? Did the vike frosh really lose a game that badly? Also the SMW football website has not been kept up at all this year! Sort of disspointing!

Are you really worried about a freshman score?

The Olathe guy at times has to be a homer so he could be better on his pickem. However theimpaler is pretty good been real close on many game on the scores.