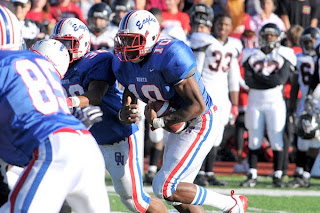 **Olathe North has appeared in the 9 state championship games. Their record in those games is 8-1. 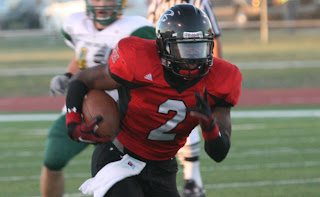 ON(11-1) vs WH(12-0) Always tough to figure the East v. West final since the two sides of the state never play each other during the season so there are simply no common opponents to compare. You have to go back to 1995 to find a state champ from the East who wasn't named Olathe North. Fortunately the Eagles are playing this year so maybe the East has a chance. Heights has appeared absolutely awesome for most of the year, a complete scoring machine. But, as has been pointed out here, they play mostly Wichita schools and, let's face it Wichita football is not very good. Of the state champs from the west over the last 15 years, it's been once for Garden, once for Junction and several for now 5A Hutch. You have to go back to 82 and 83 to find a Wichita team winning the state championship. The Falcons looked very beatable for 6 quarters in a lackluster game against a mediocre Junction City team and a desperate come from behind win over what I still think is a superior Dodge squad. The do have a quality week one 21-0 win over a Carroll team that appears poised to win the 5A title this year. Still North won this game 37-3 last year and it's hard to believe the balance of power has shifted that much. I think Saunders and Simmons grind it out in the ground game limiting the number of possessions and keeping the Heights offense at bay. The Eagles repeat here in a much closer game....ON 28 WH 21

I disagree that Carrol will beat Blue Valley in 5A. Your talking about a coaching staff that has 3state appreances and two rings of their own (2003, 2006). Yeah, I know Rampy left but basically the whole staff from those two teams are still intact for the most part. Plus, BV beat Gardner, who many people expected to win state, even over the all (maybe not-so) mighty Hutch. Again, Carrol preys on the weak Wichita schools system.

As a SMW fan, I would never sell BV short but I think maybe their revenge win over G/E was their super bowl. Plus Carroll rolled Hutch pretty good. I expect it will be a good game but I'd have to go with BC after their performance last week. But hey the way I've been picking in the playoffs, maybe that ensures a win for the Tigers.

Impaler, I'm just back to say I told you so (regarding BV vs Bishop Carrol) You are wise in the ways of East Kansas, but your lack of knowledge of the west is showing- you were a bit off in that WH/ON score...