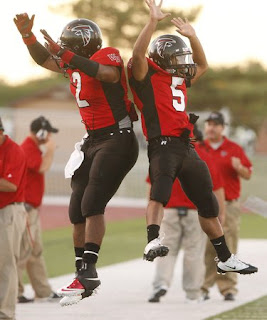 Olathe North (11-1) vs. Wichita Heights (12-0)
When: Satrurday (Nov. 27) at 1:00 p.m.
Where: Washburn University's Yager Stadium, Topeka, KS
CJ-Online Computer Spread: Wichita Heights by 20.4
Players to Watch
Olathe North
For the past 12 weeks Olathe North has relied on its two Kansas commits, running back Adonis Saunders and quarterback Victor Simmons, for the majority of their offensive production. Saunders has rushed for 1,512 yards and 19 touchdowns, while Saunders has added 1,375 rushing yards and 10 rushing touchdowns. Defensively Kyle Swartz was perhaps the best defensive player in the Sunflower League this season, evidence by his 130 tackles. The Eagles wildcard could be Tanner Gentry who leads Olathe North in sacks with nine, and plays the role of the Eagles biggest deep pass threat.
Wichita Heights
Wichita Heights has a running game attack that rivals any the state of Kansas has seen over the last decade. The main threat it running back Dreamius Smith (above, left) who will be joining Saunders and Simmons at Kansas next year. Smith has rushed for 1,551 yards and 33 touchdowns. Next in line is fellow running back Daniel DeShazer (above, right), who is committed to wrestle at Oklahoma next season. He has rushed for 1,073 yards and 14 touchdowns. At quarterback is junior Matt Reed, who has rushed for 957 yards and 13 touchdowns, and you can't forget about the Falcons' Marquel Moore who has added 527 yards and nine touchdowns of his own. I'll save you the time on the math--combined those four have rushed for 4,108 yards and 69 touchdowns in 12 games. On defense Wichita Heights is led by their two top pass rushers Zerrance Brickhouse (13 sacks) an Dominique Henderson (nine sacks), as well as the Wessel brothers Evan (eight interceptions) and Trevor (four interceptions).
What to Expect
If you like watching teams that run the football alot, this may very well be the game of the year for you. Also, let's not forget, this isn't your typical three yards and a cloud of dust type of running contest. Both squads have amazing team speed (you could make a good case that these are the two fastest 6A clubs) and big play capabilities--especially considering the three division prospects the game will be featuring.
It's hard to see Wichita Heights covering the 20 point computer spread, regardless of how well they play. Olathe North has the confidence to win after they dismantled Wichita Heights 37-3 in the title game last season and it should show through. Really, it wouldn't be a surprise to see this game go either way.
Photo courtesy the Wichita Eagle
Posted by Eli Underwood at 1:21 PM