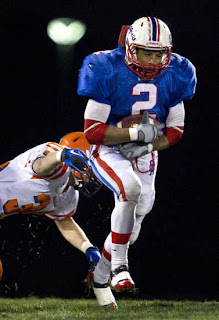 Olathe North 13, Olathe East 6
While this season wasn't as smooth of sailing as last year for Olathe North, the Eagles avenged their week three loss and are headed back to the 6A championship game. We knew both sides played good defense and in this game it really showed. After a scoreless first quarter, Olathe North was able to get on the board when Adonis Saunders (right) scored on a 59-yard run. Olathe East answered on their next possession with a 19-yard touchdown run from Brandon Willingham. The Hawks, however, showed one of their achilles heels of the season when they let Olathe North get through and block the extra point, keeping the Eagles up 7-6. Later in the quarter Olathe North kicker Daniel Gutierrez made a 27-yard field goal to put Olathe North up 10-6 at haltime.
The third quarter, much like the first, was a defensive struggle in which neither team scored. In the fourth quarter Olathe North added another Gutierrez field goal to push the lead to 13-6. Olathe East, faced with one last possession, didn't go away quietly. The Hawks were able to drive to the Olathe North 14-yard line and looked to be in position to score. Olathe East quarterback Trent Kuhl fired a pass to the endzone, but Olathe North once again made a big defense play when Dominick Wilson jumped in front of the pass and intercepted it at the Olathe North one-yard line.
Wichita Heights 42, Dodge City 38
Wichita Heights (12-0) didn't let a 28-0 first quarter defecit get them down. The Falcons, led by Kansas commit Dreamius Smith, were able to mount a comeback that was completed in the fourth quarter when Height's quarterback, Matt Reed, found receiver Evan Wessel in the back of the endzone for a late touchdown. The victory sets up another Olathe North vs. Wichita Heights battle in the 6A championship game. Last season Olathe North beat Wichita Heights 37-3 for the 6A title.
Photo courtesy the Kansas City Star
Posted by Eli Underwood at 1:47 PM

urgh, dang Dodge City, I can't they gave up a huge lead like that so easily! Now Heights is #1 in State Rankings!

Yes, I think this is the most favorable of the four possible matchups for the East side of the state. I can't beleive Dodge blew a 21 point lead. I think Dodge would have easily beaten either Olathe School, I also think Heights would beat O East pretty easily but North might give Heights some trouble...It's going to be all about ball control..If Simmons and Saunders can grind out first downs and North can keep TOP for 28 or 32 minutes and keep that powerful Heights offense off the field, they might have a chance. North won this game huge last year, but let's face it, this is not the same North team...in a way that's a compliment, this team has had to work a lot harder to get to this point than last years team did but can they pull off this last game? Tune in Thursday for my final pick of the year.

Agree, I believe the grueling tough Sunflower schedule will benefit North. Let's face it, there hasn't been a state wide competitive 6A Wichita team since South East and that was in the 80's. The Wichita Heights soft schedule will hurt them as they go to battle saturday.

Dodge would have what who have they played this year nobody. Manhattan was overrated besides them and heights who did they play. When was the last time dodge was good also. I agree this is not the same north team but hardwork wins alot of ball games and with that said north wins by 14

Eli predictions on the all league teams?