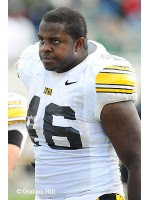 Former Lawrence Free State standout Christian Ballard (right) did well enough at this past weekend's NFL Scouting Combine to possibly warrant a late first round draft selection.  Ballard, who measured in at 6-foot-4, 283 pounds, recorded a 4.8 forty which was best among defensive tackles in attendance.  He also recorded a vertical jump of 31.5 inches, and a 9'3" broad jump which was third best among defensive tackles.

NFL Draft guru Mel Kiper, Jr. had pegged Ballard as high as the 29th best overall draft prospect in a recent mock draft, and with Ballard's performance at the combine his stock should only improve.

In his four years at Iowa, Ballard recorded 152 tackles and 12.5 sacks.  He was a starter in his last three years and he played a key role in the Hawkeyes' 2009 Orange Bowl victory.

During his high school days Ballard was commonly known as a player who "looked like Tarzan, but played like Jane," but that didn't hold back college recruiters who were willing to take a chance on Ballard and his freakish athletic ability.  As a senior Ballard chose Iowa over offers from the likes of Oklahoma, Georgia and Michigan.
Posted by Eli Underwood at 6:01 PM