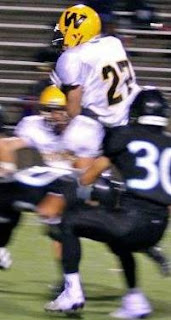 Stat to Note
Sterbach carried the ball 148 times for 1,059 yards and eight touchdowns as a junior.

Scouting Report
Sterbach's presumed weakness is his size, which is tiny by running back standards, regardless of the level of competition.  This presumed weakness, however, may in fact be what enabled Sterbach to have such a tremendous season for the Vikings in 2011.  He's one of just two returning players in the Sunflower League who put up over 1,000 yards rushing last year.

Sterbach is extremely quick in his transition from taking a hand off to getting past the second level.  Most backs don't display this type of quickness, and when you add on the fact that Sterbach is hard to see behind the offensive line it makes his running game even more effective.  His speed in the open field is good--not great--but it's the initial burst that makes him stand out.  Sterbach has a similar build and running style to former Olathe Northwest running back Connor Middleton, who was an Elite Eleven member last year.

Sterbach will be one of SM West's key skill position players along with Joel Spiller, Andre Maloney and a handful of others who will have a chance to make the Vikings one of the better offensive ballclubs in the league in 2012.
Posted by Eli Underwood at 8:49 PM