Lawrence Free State
The Firebirds won the Battle of Lawrence, finished the season on a six-game winning streak and solidified the top seed in 6A East.  They have a ton of momentum going and if they can keep playing the way they've been there's no doubt they should make it to the Sub-State Round.

SM North
I know, I know, SM North lost--badly.  This week they become the first team to ever appear on both the Up and Down lists.  But I say kudos to the Indians' players who stuck it out through the season and fought hard through the last game.  While they didn't win any games I can assure you that every player on their team who stuck it out will be better for it in the long run.

SM West
The Vikings' victory, combined with the LHS loss meant SM West won the Sunflower League championship outright.  It's the the fifth time in the past eight seasons they've won or shared the crown.  Their eight wins are also the most they've had in a season since 2009.

Olathe South
The Falcons fell victim to what's becoming known as the "5-4 Slide."  Olathe South is the third program since 2007 to go 5-4 and miss the playoffs coming off an appearance in the state title game the previous season.

SM South
Running back Gabe Guild's second half ankle injury may have cost the Raiders a victory or two and a playoff berth.  They did improve on their win total from 2011 but it would have been nice seeing what they could have done at full strength.

Week Nine Players of the Week

Cody Stanclift, Lawrence Free State: Stanclift dominated the trenches on both sides of the ball against Lawrence.  He recorded half a dozen tackles, and returned a tipped interception for a touchdown which proved to be the game-sealing score.

1. Lawrence Free State (8-1): The Firebirds came within a late interception against Olathe South from possibly going 9-0 during the regular season.  With the way they've cultivated the talent on their roster it's going to take a big upset for them to not be playing in the Sub-State game.

2. SM West (8-1): The Vikings business-like approach has earned them a Sunflower League title and the number two seed in East 6A.  Their game against Blue Valley Northwest is a major grudge match for anyone associated with the Viking football program and the Vikes will have an intense week of practice.

3. Lawrence (7-2): LHS drew the short straw playing Gardner-Edgerton, arguably the hottest team in 6A, in the first round of the playoffs.  The Chesty Lions haven't seen a running back with the speed or ability of Traevohn Wrench, nor have the Trailblazers seen a quarterback with the playmaking ability of Brad Strauss.

4. SM East (7-2): The Lancers had a nice bounce-back victory against SM North.  What's more, they match up extremely well with Olathe East.  SM East is the best run defense in the league and Olathe East's bread and butter is running the football.  The Lancers will be the favorite to win, but it's going to take some moxy to slow the Hawks' recent charge.

5. Olathe South (5-4): It was a rough finish for the defending 6A state champs as they lost a game that would have ensured a playoff berth.  The program has a ton of holes to fill in the offseason but players like Braden Smith, Thomas McCue and Jake Seurer will make that transition easier.

6. Olathe East (5-4): The Hawks' ultimate goal on offense--pounding opponents with a rushing attack spearheaded by Hayden Frazier and Ryan Woodson--has come into form the second half of the season.  They'll face the best run defense they've seen all season this week against SM East.

7. Olathe North (3-6): Anybody else see the parallels between Bill Snyder returning K-State to prominence and Gene Wier restoring the confidence at Olathe North (the ages of the coaches notwithstanding)?  Not to say the Eagles were ever really down, but that eight-game losing streak was ugly.

8. SM South (4-5): The loss to Olathe East dropped SM South from playoff contention but the Raiders were probably the league's most improved team this season.  Losing Gabe Guild to graduation will hurt, but I think they have the foundation in place for long-term success.

9. Leavenworth (4-5): The Pioneers, like the Raiders, showed great improvement from 2011 to 2012.  Their four wins were the most for the program since the 2004 season.  What's even more crazy is that Leavenworth won the same amount of games this season as what they had won in the four seasons from 2008 through 2011.

10. Olathe Northwest (2-7): Another season marked by flashes of a tremendous play but plagued by inconsistency left the Ravens with their worst record since 2008.  They have a great offensive system in place but their lack of development on the defensive side of the ball is holding them back.

11. SM Northwest (2-7): Season one of the Linn Hibbs tenure had its up and downs.  I saw a Cougars team working to form some sort of identity amidst a very strong season of play in the Shawnee Mission School District.  It makes you wonder how much of the talent influx in the late 2000s was fluke or fact.

12. SM North (0-9): To be quite blunt, success has not come easy for the Indians in any of the eight seasons since Sam Brown left his post as head coach.  They've had one three-win season, four two-win seasons, two one-win seasons and now a winless season.

Follow me @eliunderwood.  I will follow you back.  Teams that have the most interaction during the week (follows, Retweets, Tweets @eliunderwood, Favorites, comments, etc.) earn the most cred on the social media standings.  I also factor in how solid each team's student section is at the games.

The most interactive Tweeters from each school get their username's listed below their school.  I would strongly encourage you to follow these users because of their high volume of interactivity.

Note: This is the final week of "team orientated" Social Media Standings.  From here on out (since there will be fewer and fewer teams each week) the Standings will be listed on an individual basis.  That is, I will rank the most active Tweeters throughout the week.  So there will be no more categoring by team, but rather it will be a listing of individual users.  That way fans whose teams are no longer in the playoffs still have incentive to continue Tweeting and being interactive.

Their team was eliminated from playoff contention, but the Falcon Faithful kept it strong on Twitter.  The #AllPink, #AllFight, #AllFalcons campaign interaction last week was a nice orchestrated effort and I appreciate those types of mass Tweet activities.  This is the last of the official "Team" Social Media Standings for the year and I have to say--the Falcons bought in and brought it strong this season.  I was impressed with their eagerness and desire to be the most interactive fanbase.  In total, they held the #1 ranking for all 10 weeks of rankings.  Props, Falcons... oh and the baby powder thing?  Once everyone saw the Falcon student section do it in week three it became the trendy thing for student sections across the Sunflower League.

SM West was able to sneak into the #2 slot because of a strong increase in interaction before, during and after the games this past Friday.  The #NordicNasties really embraced the social media interaction as the season went along and (much like their team) were much better at the conclusion of week nine than they were at the outset of week one.  They have a chance to make SM South District Stadium a hostile environment for the visiting Huskies from Blue Valley Northwest this Friday.  We'll see if they can come through on it. 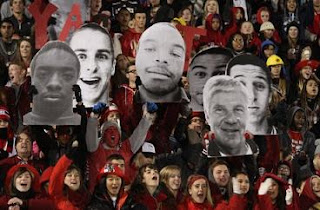 The Chesty Lions Faithful dropped one slot but it's hard to stay super active following a heartbreaking loss to a crosstown rival.  The being said, they've brought it strong all season long and were definitely worthy of a top three spot in the rankings.  Their Big Head montage, seen at the right, was hilarious.  How they do traveling and providing their team with support at Gardner-Edgerton could go a long ways in how well their team performs.  GE is not a friendly environment for visiting opponents and it will be a big week for the Chesty Lions' faithful to step up.

Eli, SMNW talent was/is not a fluke, IMO. There is some talent on the team. It just may not be utilized to their advantage. Just look at the kids that go on to college from the CC level all the way to D1 from smnw.

I have always wondered how these players can go onto play in college but they cannot get it done at the HS level.

SMN also has had some talent but for whatever reason it is not translating to results.