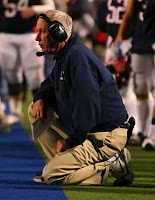 The 2009 football season will mark the last season of football in the decade of the 2000s. Alot has taken place in the Sunflower League the past 9 years (and alot will probably happen in this final season of the decade). So, why not take a look at some statistical analysis of each program over the decade, with a little bit of my own analysis mixed in?

Let's first begin by analyzing each program's win-loss record and winning percentage during the decade. One interesting thing to note is that great desparity between the top teams in the league, and then the 5 or so teams that have hovered around .500 for the past nine seasons. Starting with the top three teams...

Not surprisingly, the top three teams so far (in terms of winning) come from Olathe during the decade. Gene Wier (above) coached Olathe North to a 37-0 record during the 2000s before he departed to be the head coach at Richland High School in North Richland Hills, Texas in 2003.

SM West wedges themselves between LHS and Free State in the grouping of 4-6. SM West had only won 7 games from 2000-2002. Since the arrival of head coach Tim Callaghan, the Vikings have won 46 games in six years, by far the biggest turn around of any team during the decade. 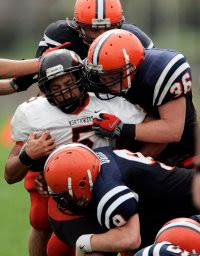 Three Shawnee Mission schools round out the 7, 8, and 9 spots. Player like Bryce Atagi (ballcarrier, right) have helped the Cougars keep a record just about .500 for the decade.

The bottom three inlcude three teams that have been perennially poor in football over the past decade. * Olathe Northwest has only been around since 2004, so their win and loss total are skewed, however, their win percentage shows that they have still been second to the last in the league since their inception.

Now to playoff and league results:

After totalling the statistics, and accolades, it is clear that Olathe North (despite rough patches since the depar 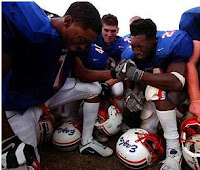 ture of Gene Weir) will be the team of the decade when the dust clears after the 2009 season. The Eagles four state championships from '00-'03 (Maurice Mack, left #24, sheds tears with his teammates following the Eagle's state championship victory in 2001) are four more than any other team the past decade (no Sunflower League team has won a title since 2003). The program's 87 wins are also 12 more than the second place team, Olathe East...

Olathe East will hold the #2 spot overall for the decade, as they have 18 more wins that third place Olathe South. The Hawks have won three Sunflower League Championships, made two state semifinal appearences, and one title game appearence in 2005.

Places #3 through #6 could make for some interesting outcomes. Olathe South has 57 wins, Lawrence has 54, SM West 53, and Lawrence Free State 52. With those four teams as close as they are in the race, the team that finished 2009 with the most wins will more than likely take the #3 overall wins spot for the decade.
Posted by Eli Underwood at 1:27 PM

Every time we present the concept to someone for the first time, they think of new possibilities. New relationships to find. New signals to assess. And I'm no different.
However, I think of all of this information at a different level as well. fengshui