Week Three Game Results
Olathe North 40, Olathe Northwest 13
Olathe North continued their dominance of the Sunflower League with a 27 point victory over rival Olathe Northwest, but the Eagles actually trailed in this game. That's right, Olathe Northwest's Devon Boyce returned the opening kickoff 96 yards to spot the Ravens a 6-0 lead on Olathe North (the second week in a row this has happened to the Eagles). But, that ultimately proved to be the last straw in Olathe Northwest's upset bid. Olathe North's James Franklin rushed for a school record 340 rushing yards, while adding four rushing touchdowns. In total, Olathe North rushed for 525 yards and only allowed Olathe Northwest to rush for 23 yards.
SM West 49, Leavenworth 0
SM West (who is quickly becoming the least publicized undefeated team in the history of the conference) finally showed off some offensive fireworks of their own with a 49 point victory over Leavenworth. Viking quarterback DJ Balazs threw two touchdown passes of 19 and 48 yards, and also chipped in a one yard rushing score. SM West running back Will Livingston scored twice on the ground for the Vikings, who led 35-0 at the half.
Olathe East 34, Olathe South 31
Despite jumping out to a 17-6 lead, Olathe South was not able to retain the lead as Olathe East came back to win by three in the end. The story of the game was Olathe East's running game, which totalled 429 rushing yards. Olathe East junior Brandon Willingham rushed for 245 yards while Olathe East senior Hayden Groves (below) threw in his own 173 yards rushing. Olathe South's Tanner Dutton produced as usual throwing for 282 yards and a touchdown, but it wasn't enough to take down the rival Hawks. 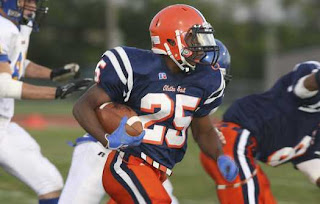 Lawrence Free State 56, SM North 14
The gaudy offensive abilities that Lawrence Free State showed off last season appear to have returned. In the first game played at their new home stadium, the Firebirds rolled to 560 yards of total offense in a crushing defeat of SM North. Free State quarterback Camren Torneden completed nine of 10 passes for 163 yards and a touchdown. On the ground, Free State running back Kirk Resseguie racked up 193 yards and four touchdowns. Torneden added 75 yards rushing and a touchdown on the ground as well. In total, the game appeared to be a wake-up call to the previously unbeaten Indians of SM North, who only totalled 163 yards of total offense.
SM Northwest 35, Lawrence 7
While their city rival appears to be back on the right track, Lawrence High is still struggling to achieve their first victory. SM Northwest came out fired up after being slightly embarrassed by Olathe North last week. The Cougars dominated on both sides of the ball and reached a level of play they hadn't played at all season. SM Northwest's quarterback Matt Nowak had a terrific game, completing eight of 11 passes for 168 yards and rushing for 107 yards and a touchdown. Cougar running back John Hauk totalled 75 yards and three touchdowns on the ground.
SM South 21, SM East 13
While SM South collected their second win of the season, SM East once again will have to go through a week with a zero in the win column. The Lancers offense seemed anemic as they dropped their third straight game. For SM South, their second win in as many weeks was the product of two Grant Hilton touchdown passes to Antonio McFadden, and a 38 yard touchdown run by Johann Swanepoel.
Posted by Eli Underwood at 11:06 AM