Olathe North 28, Olathe East 14 (All Star Video Sports Highlight Video)
Trailing 14-0 with minutes left before halftime, Olathe East's Hayden Groves sprang loose for a 64 yard run, which led to a Hawk touchdown with 29 second remaining in the half. Olathe North on the other hand would not faulter, and went on to outscore Olathe East 14-7 again in the second half for their fourth win of the season. The Eagles were led by none other than James Franklin, who rushed for 218 yards on 25 carries, and scored two touchdowns. Tre Walker chipped in 80 yards and a touchdown for the Eagles, with his last score putting the cap on a victory over their crosstown rival.

Lawrence Free State 22, SM West 15
Despite being outgained 362 to 210 in terms of total offense, SM West was in position to make another comeback againt Free State on Saturday. A long pass from DJ Balazs to Kevin Webster put SM West in position to tie things up with less than a minute remaining in the fourth quarter, but ultimately the Free State defense held for the victory. Free State was led by Kirk Resseguie who rushed for 109 yards and two touchdowns on 22 carries.

SM Northwest 34, Leavenworth 0
For the third week in a row Leavenworth failed to score any points. But the true story of the game was dominance of SM Northwest seniors John Hauk and Matt Nowak. Nowak completed 10 of 13 passes for 195 yards and three touchdowns, and Hauk carried the ball 17 times for 77 yards and two touchdown of his own. The combo accounted for all of SM Northwest's touchdowns and helped the team to a 20-0 halftime lead, before adding two second
half touchdowns.

SM East 25, Lawrence 7
The fourth straight loss for Lawrence High turned out to be downright ugly. A plethora of first half turnovers and mistakes helped SM East to build a 19-0 lead. In the second half both teams scored a touchdown keeping the deficit of loss at 19 for Lawrence. Tyrae Jenkins' (below) 20 carries for 104 yards were little solace for the Chesty Lions who now, along with Leavenworth, remain winless on the season. 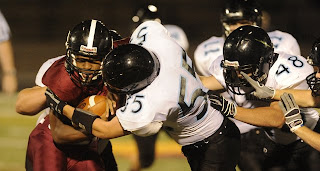 Olathe South 35, SM North 28
SM North gained a 21-7 lead at the half after a Kendall Kelly touchdown run, and two Ryan Goodburn touchdown passes but the 14 point cushion wasn't enough. Olathe South used their big play ability in the second half to outscore the Indians 28-7. Tanner Dutton put in two passing touchdowns and a rushing score for the Falcons, who improved to 2-2 on the season.

Olathe Northwest 17, SM South 7
Things looked good early for the SM South. After thwarting a promising Olathe Northwest drive, the Raiders completed an 81 yard drive of their own, highlighted by a 79 yards pass from Nick Johnson to Ricky Ashley, and capped off with a four yard run by Johannes Swanepoel. But the seven early points proved to be all the Raiders would manage. Olathe Northwest quarterback Josh Lemke used his ground abilities to add 79 yards and two touchdowns. A Nick Prologo field goal also contributed to the Raven victory.
Posted by Eli Underwood at 4:54 PM