Leavenworth (0-3) at SM Northwest (2-1) (Thursday Night Game)
SM Northwest was very impressive in their victory last week over Lawrence High, and that success should carry over into their game with the Pioneers. For Leavenworth, their season is going down as one of the most epically terrible seasons in the history of the Sunflower Conference. To change that perception, they need to put up a competitive effort--and why not sooner rather than later?

Olathe East (2-1) at Olathe North (3-0)
The O-Town rivalries are truly great. This game has featured some tremendous battles (the 2002 Sub-State matchup comes to mind) and hopefully this contest proves to be similar. Olathe East has emerged this season with the wicked running back tandem of Brandon Willingham and Hayden Groves. Olathe East's fate in this game will rest on those two. If they can't get it going against a stacked Olathe North defensive front, the Hawks will struggle to find success.

Olathe South (1-2) at SM North (2-1)
This is truly a proving game for both teams. SM North was high on the hog after a 2-0 start before being drubbed by Lawrence Free State last week. Are they legitimate? Olathe South has blown two large leads against Olathe East and SM West in their two losses. Can they close out an opponent? Alot of questions should be answered in this matchup.

SM East (0-3) at Lawrence (0-3)
The fact that neither of these teams has a victory heading into week four is very surprising. Lawrence returned a decent amount of talent on both sides of the ball, and SM East is now in the hands of one of the most well-known coaches in the KC Metro. Yet, here we sit in week four with the two teams a combined 0-6. This game is a toss-up, but one thing is for sure--nobody wants a goose egg in the win column after four weeks of football.

Olathe Northwest (1-2) at SM South (2-1)
This is another proving-of-worth game. It's been hard to gauge whether Olathe Northwest is as mediocre as their 1-2 record, or if SM South is as decent as their 2-1 record. Both teams have had some nice weapons emerge (Olathe Northwest's Devon Boyce (below) has been explosive as a kick returner) through the early part of the season, and it should be fun to watch both sides battle it out. 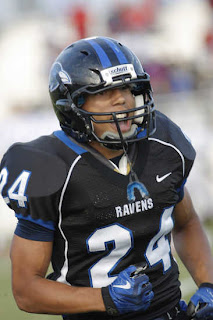 Lawrence Free State (2-1) at SM West (3-0) (Saturday at 12 pm)
This matchup gets my nod for game of the week. Both SM West and Free State have been playing at a very high level the past two weeks, and it should be an exciting Saturday afternoon in Overland Park. It will be interesting to see how the two teams handle the extra day of preparation and the hot temperatures that may arise from playing on turf at high noon--leg cramps anyone?
Posted by Eli Underwood at 5:03 PM